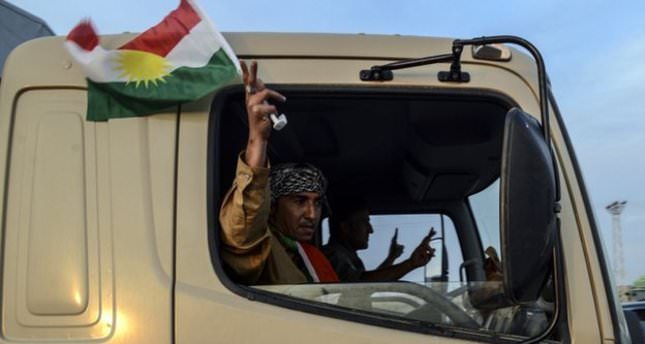 The first peshmerga soldiers, including 10 fighters among a group of 150 Kurdistan Regional Government (KRG) troops entered Kobani from Turkey's southeastern province of Şanlıurfa Thursday to push back Islamic State of Iraq and al-Sham (ISIS) militants and reinforce People's Protection Units (YPG) fighters in Syria's northern town of Kobani for 40 days. YPG is seen as the Syrian-wing of the outlawed PKK. Along with Iraqi KRG peshmerga forces, a group of 200 Free Syrian Army (FSA) fighters, a strict opponent of the Bashar Assad regime, also silently crossed into the besieged town to help the YPG on Wednesday and reportedly began battling against the ISIS militants yesterday.

Two groups of peshmerga are reportedly set to join fellow Kurds fighting in Kobani but have yet to cross the Turkish border into Syria. A convoy carrying heavy weaponry and traveling by road also arrived in the Suruç district in Şanlıurfa and were met by other peshmerga forces. It is still unclear when the fighters will cross the border. According to Kurdish and Turkish officials, a larger deployment was expected within hours.

Turkey, a necessary member of the anti-ISIS coalition due to its close location to Syria, came under harsh criticism from international media outlets asserting that Ankara does not accept taking a frontline role in the fight against ISIS. Earlier this week, Foreign Minister Mevlüt Çavuşoğlu announced that Turkey allowed peshmerga forces to enter into Kobani from Turkey in accordance with the Oct. 2 troop mandate to show Ankara's continued effort so as to break the ISIS siege on Kobani. With this move, Ankara signaled that it does not refrain from exerting what is necessary to prevent Kobani from succumbing to ISIS.

The ISIS siege of Kobani has turned into a test for the U.S.-led coalition that began military action in early October to halt the ISIS advance. The coalition has carried out over 150 airstrikes on the ISIS militants besieging the town. According to U.S. officials, the airstrikes have killed hundreds of the militants, but neither the military action nor the coalition's resupplying of YPG fighters by airdrop have yielded the expected results yet.

Most of the fighters battling ISIS in Kobani are members of the PKK Syrian affiliate Democratic Union Party's (PYD) armed YPG. For that reason, Turkey has some reservations on the U.S. resupplying the YPG in Syria.

Ankara has been strongly against supporting what it sees as a terrorist organization given that the weapons provided to the organization could, under certain circumstances, later be used against Turkey. Assessing the risk, Ankara began seeking alternative ways to contribute to the anti-ISIS coalition such as proposing that the U.S. administration support officially recognized armies such as the KRG peshmerga and the FSA instead of the PYD's YPG.

The Assad regime yesterday accused Turkey of a violation of its sovereignty in a statement after Ankara allowed peshmerga and FSA fighters to enter Kobani from Suruç.

"Syria denounces and rejects this disgraceful behavior by the Turkish government and by its accomplices who have been responsible for the Syrian crisis from the beginning," said the statement referring to the U.S.

Killing thousands and displacing millions more Syrias, the Syrian regime has systematically blamed Turkey, the U.S. and Gulf countries for the war that has been raging in Syrian for the last three years.

The arrival of peshmerga forces and FSA fighters in Kobani will provide critical military assistance in the fight against ISIS militants in the town. Despite the PYD's reservations and cool stance toward the arrival of these two groups, Kurdish groups in Syria appear to be forming unity in the face of ISIS, which they consider a bigger threat, for the first time since the outbreak of chaos in the region. According to regional experts, the rivalry between Kurdish groups having political differences will continue if they manage to turn the tide in Syria and break the ISIS siege.