Kerry, Iran minister to meet ahead of deadline for nuclear deal 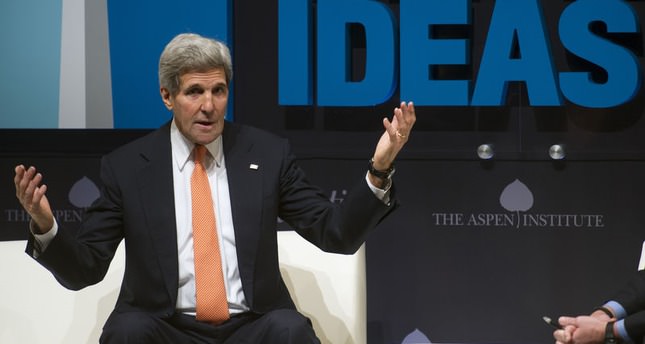 by Oct 31, 2014 12:00 am
U.S. Secretary of State John Kerry will meet Iran's foreign minister and the European Union foreign policy chief in Oman on Nov. 9-10 to discuss the Iranian nuclear issue ahead of a looming deadline for a final agreement, the U.S. State Department said on Friday.

Kerry's talks in Muscat, Oman with Iranian Foreign Minister Mohammad Javad Zarif and the EU's Catherine Ashton are due to take place two weeks before a Nov. 24 deadline for Tehran and six major powers to reach a long-term agreement on Iran's nuclear program.

The high-level gathering is one of series of meetings in the final weeks before the deadline. Before heading to Oman Ashton will meet senior foreign ministry officials from the six powers - Britain, China, France, Germany, Russia and the United States in Vienna on Nov. 7, Ashton's spokesman Michael Mann said.

The six will then begin meeting again with the full Iranian delegation in Vienna on November 18, he added. EU coordinates the negotiations on behalf of the six powers.

"The aim of the talks is to reach a comprehensive agreement with Iran by Nov. 24, under which it would reassure the international community about the exclusively peaceful nature of its nuclear program," Mann said in a statement.

Last week the top U.S. negotiator in the Iran talks, Under-Secretary of State Wendy Sherman, said Iran will be widely seen as responsible if a comprehensive deal to curb its nuclear program is not reached.

Both sides say they still aim to meet the Nov. 24 deadline for a deal, despite doubts among many experts that they can reach an accord that would end a decade-old dispute over Tehran's nuclear program with just a few weeks remaining.

Relations with the West have thawed since Hassan Rouhani was elected president last year seeking to end Iran's international isolation, and the talks are aimed at easing concerns about Tehran's atomic activities in exchange for lifting economic sanctions.

But Western officials say there are still differences in the positions of the two sides, especially over the future scope of Iran's uranium enrichment program, which can have civilian and military uses.

The United States, France, Britain and Germany would like the number of enrichment centrifuges Iran maintains to be in the low thousands, while Tehran wants to keep tens of thousands in operation. It now has about 19,000 installed, of which about 10,000 are spinning to refine uranium.

Iran and the six powers reached an interim deal last November under which Tehran received limited sanctions relief in exchange for halting the production of medium enriched uranium. That six-month accord took effect early this year and was extended by four months in July.