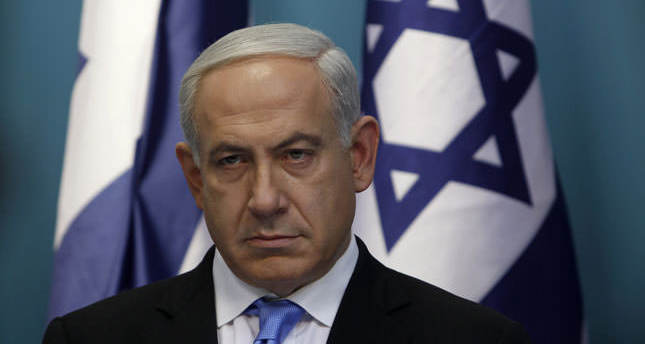 by Daily Sabah Nov 03, 2014 12:00 am
Prime Minister Benjamin Netanyahu of Israel was heavily criticized by Israeli Justice Minister Tzipi Livni over his illegal settlement policies and the relations with Palestinian side amid the escalated tension in the country due to the closure of Al-Aqsa Mosque. "In the absence of a peace process, one must act responsibly. Declarations of construction [in the West Bank and East Jerusalem], fiery statements and provocations must be avoided; they are not the right path. It harms our ability to keep Israel secure," Livni charged during an interview on the U.S. news program Meet the Press. She was referring to the announcement this week that Netanyahu approved plans for over 1,000 units in East Jerusalem and to reports of plans for a large-scale project in the West Bank including 2,000 units, 12 new roads, parks, student villages and renovation of the Tomb of the Patriarchs in Hebron. The announcement of the new illegal settlement plan attracted the anger of the U.S. With relations already strained between the U.S. and Israel following the extension of an Israeli settlement project in East Jerusalem, tensions are threatening to spill over after a U.S. official used profanity to describe Netanyahu. The U.S. State Department said the name-calling of the Israeli prime minister was an "inappropriate depiction" while stressing the "unshakable" ties between the two countries in an effort to ease the ongoing tension.

"[The Secretary of State John Kerry] certainly feels strongly that a war of words is not productive from either side. Obviously, we believe that moving forward, it's in the best interests of both sides to address any issues that may arise appropriately and respectfully and not through personal attacks," U.S. State Department spokeswoman, Jen Psaki, said in a press briefing held on Wednesday. An unnamed U.S. official said in an interview with the Atlantic Monthly, a U.S. magazine: "The thing about [the Israeli prime minister] is, he's a chickens**t." Kerry has since apologized for the remark, the source of which was not made public. "The slurs from [officials in] the Obama administration were unnecessary and it's a good thing an apology was issued," Livni said. "But the fact that there was an apology doesn't mask the rift in ties," she warned. "Those who want to protect Israel must preserve ties with the U.S." Livni slammed what she called Netanyahu's "surrender to the ideological right [in the coalition], those who call for a 'Greater Israel,' " accusing them of harming ties with the U.S. and having the added consequence of harming Israeli security as a result.

While the U.S. is trying to help Israel in the international sphere and at the U.N., Israel must not sabotage this, she warned. "This is my criticism of Netanyahu."

"The situation in Jerusalem severely deteriorated since the murder of Palestinian teenager Muhammad Abu Khdeir," she said. Khdeir was killed in revenge for the kidnapping and murder of three Israeli teenagers, Eyal Yifrach, Gilad Shaar and Naftali Fraenkel. The tension was not helped by the announcements of new tenders and statements by various ministers charging that Israel will never compromise on Jerusalem, she added.

Livni, who was chief negotiator with the Palestinians during the ill-fated, U.S.-brokered, nine-month peace talks that collapsed in the spring, said she will continue to strive for a peace process and will stay in the government to protect democracy.

"If we see that we can't return to negotiations with the Palestinians, we must initiate a process ourselves," Livni said, referring to peace efforts that involve moderate Arab states.

"[Palestinian Authority President Mahmoud] Abbas can choose where he leads his people and we must choose where we lead ours. We mustn't let him lead us […] Israel must choose its own path," she said.

Despite the criticism, Netanyahu on Saturday urged lawmakers to show restraint over Jerusalem's al-Aqsa mosque, which has been at the heart of rising tension with the Palestinians in recent weeks. The shuttering of Al-Aqsa Mosque by Israeli authorities has led to increasing tension that has triggered social unrest between Israelis and Palestinians in Jerusalem, and a spokesman for Palestinian Authority president, Mahmoud Abbas, denounced the closure of the volatile compound as "tantamount to a declaration of war." The Palestinian Authority said, "We hold the Israeli government responsible for these dangerous escalations in occupied East Jerusalem, the latest of which was the closure of Al-Aqsa Mosque compound," Anadolu Agency (AA) reported. The holy site that contains Al-Aqsa Mosque is the third holiest site in Islam and the most sacred site in Judaism, called the Temple Mount. "Israeli authorities [have completely] shut down Al-Aqsa Mosque since dawn," Sheikh Azzam al-Khatib, head of the Jordanian-run Organization for Muslim Endowments and Al-Aqsa Affairs, told AA.

In a sign of concern that the situation could escalate, Netanyahu called in a statement "on all Knesset members to calm tensions regarding the Temple Mount and show responsibility and restraint." Netanyahu has said Israel has no intention of altering the status quo, but far-right activists and lawmakers have been pushing for Jewish worship at the site. Israeli police often restricts access to al-Aqsa when concerned about possible violence there, only letting in women and Muslim men over the age of 40 or 50. Shortly after Netanyahu's statement, one leader of the campaign for Jewish worship, Likud lawmaker Moshe Feiglin, said on Twitter he would be heading to the complex on Sunday. "I do not accept anyone threatening us here in the land of Israel, saying the situation is volatile and therefore we must not go up," Israeli Housing Minister Uri Ariel, of the far-right Jewish Home party, told Reuters at the rally. The tension has not decreased since the Israeli side has not made a step to decrease the tension.