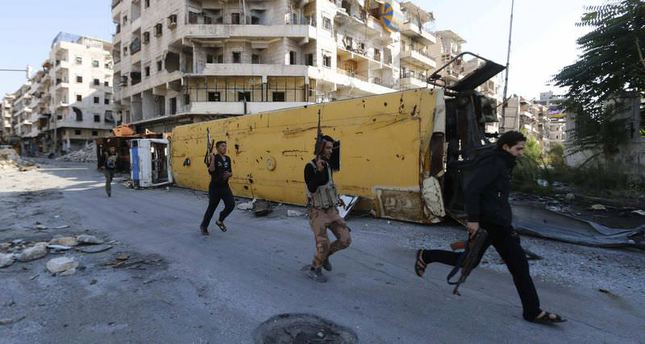 by Anadolu Agency
Nov 04, 2014 12:00 am
Syrian regime forces have increased the scale of their attacks to encircle Aleppo, the second largest city of Syria, and the center of opposition movements.

According to an article published by AlJazeera Turk on Tuesday, the city is currently only linked to the rest of the opposition-controlled areas by a 4-km wide corridor leading to the northwest of the city.

The regime forces started their attacks to increase their control of the area on October 4, the first day of Eid, and heavy fighting was reported from Handerat and Sifat villages.

The regime forces had earlier managed to capture Sifira, one of the largest military bases in Syria, Aleppo International Airport and Aleppo Industrial City, located in Sheikh Najjar which is in the eastern outskirts of the city.

If it becomes encircled by the regime forces, Aleppo would be the fourth city to be in this situation, after Ghouta, Yarmouk and Homs, which would be a major blow to the opposition forces' logistical operations. The current humanitarian crisis of the city would likely get worse, and it's feared that this would trigger the largest influx of refugees to neighboring areas and countries yet.

Located just 45 km east of the Turkish border, Aleppo is the only remaining large Syrian city under opposition control.