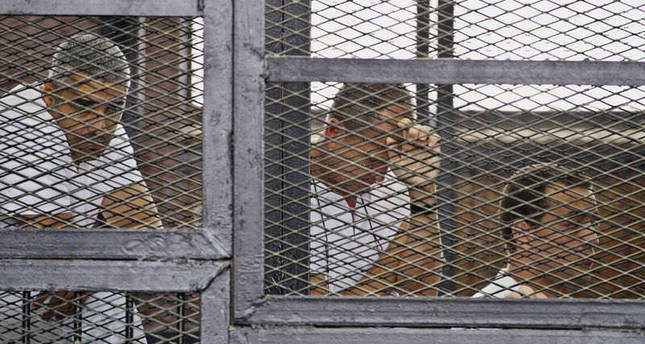 by AA
Nov 05, 2014 12:00 am
Human rights groups have called for action to be taken by the UN Human Rights Council to address Egypt's "human rights crisis."

The call came Wednesday as the council reviewed human rights in Egypt at the UN's Geneva headquarters where 122 countries raised concerns and gave recommendations.

But Philippe Dam from Human Rights Watch (HRW) said there was "very little commitment" at today's panel to address the situation in Egypt."

"It is worrying to see that a number of EU delegations failed to reflect the magnitude of the human rights situation in Egypt," he said.

A number of high-profile Egyptian rights defenders have left the country under threat of criminal prosecution, according to the organization.

Nicolas Agostini, the International Federation for Human Rights' (FIDH) delegate to the UN, said: "Many of the Egyptian independent NGOs have chosen not to travel to Geneva today due to fears of reprisals to which they would be subjected when they go back to Cairo."

Several countries including Turkey called for a moratorium to be issued on the death penalty in Egypt, while others expressed concern over the rights of freedom of expression and association.

The Egyptian government has set a November 10 deadline for non-governmental organizations to register under a restrictive 2002 law, or face criminal charges.

The review is Egypt's second and since the first in 2010. The country has seen dramatic changes including the 2011 uprising which led to the ouster of former President Hosni Mubarak's dictatorship, followed by a military coup which toppled the first democratically elected president in Egypt's history, Mohamed Morsi.