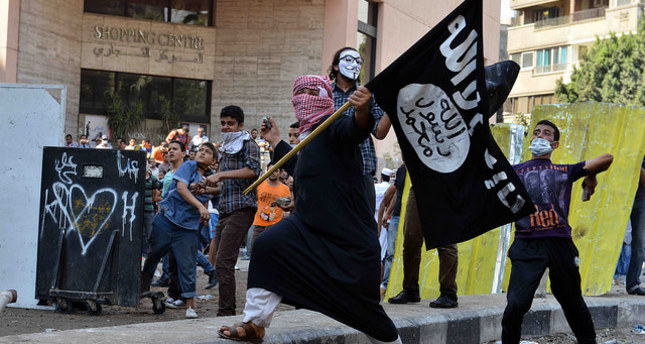 by Daily Sabah Nov 05, 2014 12:00 am
The terrorist organization Ansar Bayt al-Maqdis – known for its terror attacks in Egypt's Sinai Peninsula – has allegedly sworn allegiance to the Islamic State of Iraq and al-Sham (ISIS), a statement from Ansar said Monday night. Ansar had previously told Reuters that it sought inspiration and advice from ISIS, an al-Qaida offshoot that has taken over large areas of Iraq and Syria, drawing U.S.-led airstrikes as it tries to remake the map of the Middle East. "After entrusting God, we decided to swear allegiance to the emir of the faithful, Abu Bakr al-Baghdadi, caliph of the Muslims in Syria and Iraq and in other countries," the statement said. The group has adopted the Salafi understanding that seeks to establish a state with strict religious jurisprudence. However, in the Sinai, tribes also play a key role and some tribes support the group against the Egyptian state. The two groups, Ansar Bayt al-Maqdis and ISIS, have similar ideologies and religious understanding. Their enemies seem to be similar as well; therefore, it is sensible that the groups will cooperate. However, the kind of cooperation that will take place and how it will occur are uncertain. Egyptian security forces face a jihadi insurgency that has killed hundreds of soldiers and policemen. Egypt generally claims that there is a link between the Muslim Brotherhood and Ansar Bayt al-Maqdis. However, the group strictly rejects the claims and Ansar Bayt al-Maqdis has never confirmed it.