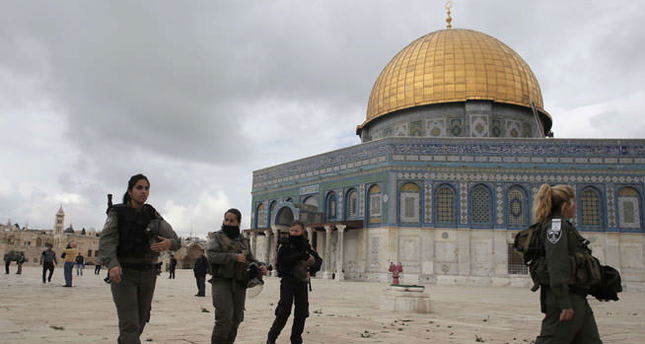 by Daily Sabah Nov 06, 2014 12:00 am
Clashes erupted in Jerusalem on Wednesday, after a number of Jewish settlers stormed the Al-Aqsa Mosque following clashes between Israeli police and Palestinian worshippers inside the complex, a Palestinian official said.

It was reported that Israeli police fired bullets into the air to disperse the angry crowds. A witness told Daily Sabah that Israeli forces entered the compound to close the front gate. "The Israeli police allowed the settlers to storm the compound and are now providing protection for their tour," Sheikh Azzam al-Khatib, director-general of the Organization for Muslim Endowments and Al-Aqsa Affairs, a Palestinian nongovernmental organization, told Anadolu Agency.

Israeli police said that protesters threw stones and firecrackers at police officers minutes before the mosque compound opened. "Police entered the area, pushed the masked rioters back and they fled back into Al-Aqsa. Police closed the front gate of the mosque but did not enter," said Micky Rosenfeld, an Israeli police spokesman.

The closure of the mosque by Israeli authorities last week increased tensions between Israelis and Palestinians in Jerusalem, triggering further social unrest. After the closure, a spokesman for the Palestinian Authority President Mahmoud Abbas denounced the closure of the controversial compound as "tantamount to a declaration of war."

The Palestinian Authority said, "We hold the Israeli government responsible for these dangerous escalations in occupied East Jerusalem, the latest of which was the closure of Al-Aqsa Mosque compound," AA reported. After heavy criticism from the US and other countries, following the closure of the holy site, Israel lifted the clampdown and reopened the mosque compound last Friday, allowing Muslims to take part in the weekly Friday prayer, in an effort to ease the ongoing tension. However, only those over 50-years-old were allowed to enter the mosque due to restrictive security measures.

The Israeli government is facing heavy criticism both inside the cabinet and from the international community due to its aggressive and uncompromising stance on the compound, and its insistence on building new settlement areas in occupied territories. Israeli Prime Minister Benjamin Netanyahu was heavily criticized by Israeli Justice Minister Tzipi Livni over his illegal settlement policies and relations with Palestinians amid the escalated tension in the country due to the closure of Al-Aqsa Mosque.

"In the absence of a peace process, one must act responsibly. Declarations of construction [in the West Bank and East Jerusalem], fiery statements and provocations must be avoided; they are not the right path. It harms our ability to keep Israel secure," Livni charged during an interview on the U.S. news program "Meet the Press."

She was referring to the announcement this week that Netanyahu has approved plans for over 1,000 new units in East Jerusalem, and to reported plans for a large-scale project in the West Bank, including 2,000 units, 12 new roads, parks, student villages and renovation of the Tomb of the Patriarchs in Hebron.

Besides Livni, the U.S. and EU countries' authorities also criticized Israel for escalating the tension and damaging peace attempts in the country.