Hamas calls on Palestinians to head for Muslims’ holy compound 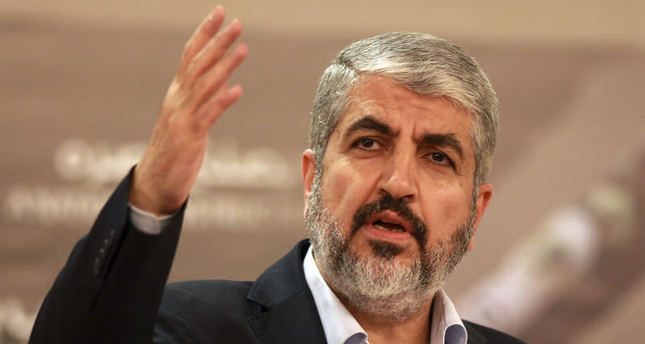 by Daily Sabah Nov 07, 2014 12:00 am
Hamas urged Palestinians to head to Jerusalem to "show support to occupied Jerusalem and Al-Aqsa Mosque" on Friday. The call follows violence in Jerusalem over the past two weeks, brought about by Israeli aggression toward the holy Muslim compound, Al-Aqsa Mosque.

Hamas called for marches on the points where Israeli army troops are stationed in the West Bank. One of the marches headed to the Qalandiya military checkpoint between Ramallah and Jerusalem, and another headed to the central Hebron neighborhood of Bab al-Zawiya, a statement released by Hamas said, Anadolu Agency (AA) reported. Several rallies staged by Hamas on Friday were dispersed in the West Bank, eyewitnesses told AA. Around 20 protesters were detained.

Muslim worshippers flocked to the hotly contested holy site in Jerusalem for weekly prayers on Friday, amid fresh restrictions on access to the Al-Aqsa Mosque compound in East Jerusalem. "Israeli police have banned men under 35 from entering the compound," Sheikh Azzam al-Khatib, director-general of the Organization for Muslim Endowments and Al-Aqsa Affairs, a Palestinian NGO, told AA.

Regarding the current unrest in Jerusalem, one of the EU's top officials underscored the urgent need for peace talks between Israel and Palestine in order to stop the ongoing surge in violence.

"The risk of growing tensions here in Jerusalem is that, if we do not move forward on the political track, we will go back, and back again to violence," the EU's new foreign affairs chief Federica Mogherini told reporters during her first official visit to Israel. "That's why I see urgency in moving forward on the dialogue," she added.

Peace between Israel and Palestine is hard to achieve as Israel's attitude toward the holy site in east Jerusalem has caused clashes between Israelis and Palestinians that have triggered social unrest, which threaten peace in the Middle East. The illegal storming of the Al-Aqsa Mosque on Wednesday by Jewish extremists led to clashes between the two communities living in Jerusalem. Since then, violence has erupted in the streets of Jerusalem following clashes between Palestinian protesters and Israeli forces which flared up on Wednesday night.

Meanwhile, following a wave of bomb attacks against the homes of Fatah leaders in Gaza on Friday, Palestinian president Mahmud Abbas's Fatah movement held Hamas responsible for the Gaza bomb attacks. "The Fatah central committee condemns the crimes which took place this morning against its leaders and lays the responsibility for these crimes upon Hamas," senior Fatah official Nasser al-Qidwa told a news conference in the West Bank city of Ramallah. Hamas has denied responsibility.

Israel ordered the first full closure of the Al-Aqsa mosque compound last week in 14 years. The Israeli cabinet has been working on a draft law to partition the Al-Aqsa Mosque compound between Muslims and Jews. Since Israeli occupation of the West Bank, East Jerusalem, and the Gaza Strip in June 1967, the compound has been reserved for Muslim prayer alone, although Jewish Israeli visitors are also allowed to the site under the surveillance of Israeli police. The Jordanian government, known as the Waqf, has been running the holy site since then.

Tensions flared between Israelis and Palestinians after Israel announced the expansion of its "illegal" settlement project, which includes establishing major construction sites in the area as well as a planned increase in the number of Jewish settlers in the occupied territories.