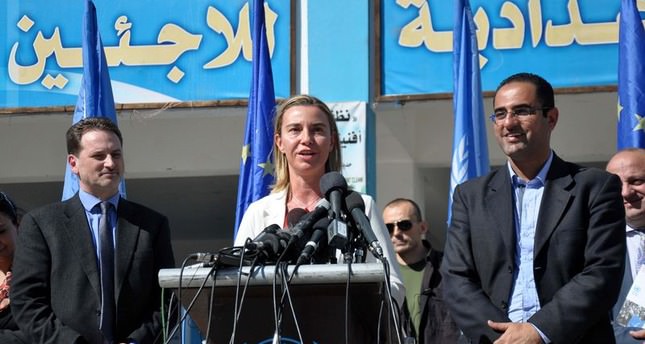 by Anadolu Agency
Nov 08, 2014 12:00 am
The European Union's new foreign affairs chief Federica Mogherini called for the establishment of a Palestinian state on Saturday, and reiterated the E.U. rejection to continued Israeli settlement activities in the occupied West Bank, during her visit to Gaza.

"We need a Palestinian state, that is the ultimate goal and this is the position of all the European Union. The world cannot afford another war in Gaza." Mogherini said.

She said the only way the suffering of the people of the Gaza Strip could be brought to an end was for the Palestinian-Israeli conflict to be ended and a Palestinian state be established to live in peace side by side with the state of Israel.

Mogherini said she had delivered a note about this demand to both Israeli Prime Minister Benjamin Netanyahu and Foreign Minister Avigdor Lieberman.

The European official pledged continued European financial and moral support for the Palestinian national unity government with the aim of helping it carry out its duties toward Palestinian citizens in the occupied West Bank and the Gaza Strip.

Mogherini said she and her colleagues in the E.U. were working hard to speed up the reconstruction of Gaza, noting that they would do everything possible to help Gaza's children who were born at refugee centers in schools and also help displaced Gazans go back to their homes.

More than 100,000 people are displaced across the Gaza Strip, including 50,000 who live in UNRWA facilities, according to United Nations figures.
Apart from killing more than 2,157 people and injuring more than 11,000 others, the latest Israeli offensive on the Gaza Strip left 9,000 Palestinian homes in total ruin and 8,000 others in partial ruin, according to the Palestinian Housing and Works Ministry.

The offensive, which started in early July, came to an end on August 26 after Palestinian factions signed a cease-fire with Israel.