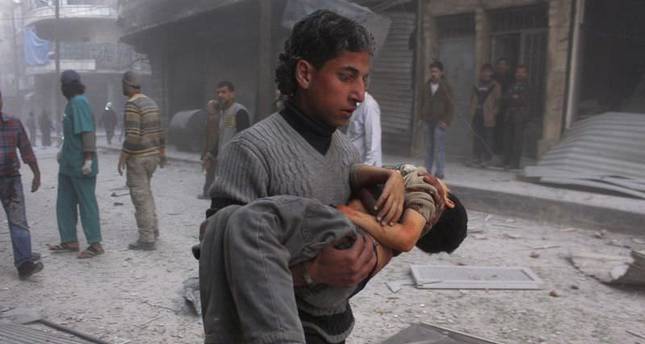 by Daily Sabah with Agencies
Nov 09, 2014 12:00 am
The Syrian regime, which has been targeting civilian and unarmed people since the beginning of the civil war in the country, has carried out airstrikes in northern Syria, which is controlled by the Islamic State of Iraq and al-Sham (ISIS). At least 21 people were killed and around 100 wounded, the U.K.- based Syrian Observatory for Human Rights, which monitors casualties in the country. Syrian military helicopters dropped barrel bombs and warplanes launched airstrikes on al-Bab, which lies northeast of the city of Aleppo, the monitoring group said. One of the 21 killed was a child and the death count was expected to rise as some of the wounded were in serious condition, they said. It is unclear whether the other people killed were ISIS militants or civilians. Aleppo Media Center activists said the death toll was 30.

U.S-led warplanes have also been hitting ISIS targets in Syria in a campaign that Washington says is not coordinated with Damascus. The Syrian army previously hit an area near al- Bab in September, saying it had "eliminated a number of terrorists" shortly after U.S.-led strikes started. There was no immediate report on the latest strikes from Syrian state media.

On last Wednesday, forces loyal to the Syrian regime attacked a school with a mortar strike in a rebel-held suburb east of Damascus, killing at least 17 children whose bloodied bodies were laid out on the floor of a crowded field hospital awaiting burial, activists said. Activists in Syria last week reported that at least 16 people died from barrel bomb attacks carried out by the Syrian air force loyal to the regime.

The war in Syria, which started in March 2011 with pro-democracy protests but rapidly grew into a horrific civil war, has caused the death of more than 200,000 people and at least 60,000 are missing. The war also displaced nearly 10 million people. The Assad regime has been accused of committing war crimes against civilians by insurgent groups. Istanbul
Last Update: Nov 09, 2014 9:13 pm