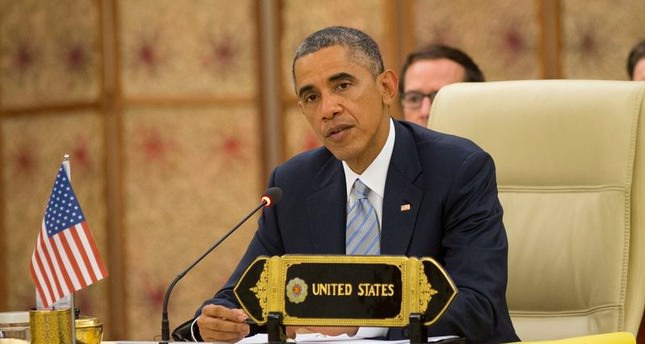 by AA
Nov 13, 2014 12:00 am
United States President Barack Obama warned against "steps backward" in Myanmar's reform process ahead of high-level meetings in the country's capital, Nay Pyi Taw, on Thursday.

"In some areas there has been a slowdown in reforms, and even some steps backward," he told the local Irrawaddy news website.

Obama meets with Myanmar's President Thein Sein during the East Asia Summit, and on Friday will travel to Yangon, the former capital, to meet with opposition leader Aung San Suu Kyi before addressing a crowd at the University of Yangon.

He is using the trip to urge Myanmar's nominally civilian government to renew its efforts at democratic reforms that began in 2011, when former general Thein Sein came to power.

Obama cautioned that former political prisoners "continue to face restrictions" and "members of the media have been arrested." Aung Kyaw Naing - a reporter whose death in military custody recently sparked international condemnation - was "tragically and senselessly murdered," Obama added.

The military claims the journalist was working for rebel troops and that he was shot after trying to steal a gun and escape.

Obama added that his administration is "deeply concerned about the humanitarian situation in Rakhine State and the treatment of the Rohingya and other Muslim communities, who continue to endure discrimination and abuse."

Buddhist-led violence in 2012 left scores of Muslims dead and around 140,000 confined to squalid displacement camps after being forced to flee their villages.

"One of the main messages that I'll deliver on this visit is that the government of Myanmar has a responsibility to ensure the safety and well-being of all people in the country, and that the fundamental human rights and freedoms of all people should be respected."

Obama's tone is significantly different from 2012, when he arrived for his first visit to "extend a hand of friendship to the new government, which came to power after an election widely considered to have been rigged in its favor, and which Aung San Suu Kyi's party boycotted.

The U.S. president has since been criticized for rewarding the reformist government for its promises, rather than genuine changes.

Suu Kyi hit out at the U.S. at a press conference last week for its stance on the government's reform efforts.

"We do think there have been times when the United States government has been overly optimistic about the reform process," she said.