ISIS beheads an American despite converting to Islam 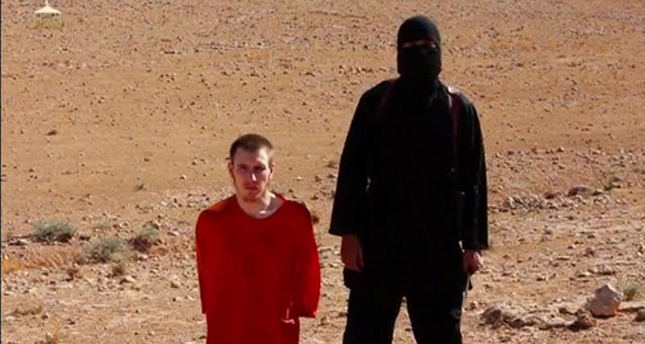 ISIS released a video claiming that the group beheaded another American citizen although he had converted to Islam during his captivity. However, U.S. officials are yet to confirm the authenticity of the video

Islamic State of Iraq and al-Sham (ISIS) militants claimed that they executed an American citizen in a video released on Sunday. Unlike the previous ones, the video did not show the beheading but showed a masked man standing with a decapitated head covered in blood lying at his feet. Speaking in English with a British accent, the man said, "This is Peter Edward Kassig, a U.S. citizen."

Kassig, a 26-year-old from Indiana, is also known as Abdul-Rahman, a name he took following his conversion to Islam while in captivity. The victim's family said he was abducted in Syria's Deir al-Zor on Oct. 1, 2013. A former soldier, Kassig was doing humanitarian work through Special Emergency Response and Assistance, an organization he founded in 2012 to help Syrian refugees, the family claimed. In an apparent reference to testimony about Kassig by former fellow captives, the masked man said, "Peter, who fought against Muslims in Iraq while serving as a soldier in the American army, doesn't have much to say. His previous cellmates have already spoken on his behalf."

The announcement of Kassig's death formed part of a 15-minute video in which the group issued warnings to the United States, Britain and others including Shiite Muslims. It also shows militants beheading several men identified as pilots and officers loyal to Syrian President Bashar Assad. "To Obama, the dog of Rome, today we are slaughtering the soldiers of Bashar and tomorrow we will be slaughtering your soldiers," the masked militant said.

British Prime Minister David Cameron, who is in Australia for a meeting of G20 leaders, said on Sunday that he was horrified by the video. "I'm horrified by the cold blooded murder of Abdul-Rahman Kassig. ISIS has again shown their depravity. My thoughts are with his family," Cameron said on Twitter. The White House said the U.S. intelligence community was working to determine the authenticity of the video. National Security Council spokeswoman Bernadette Meehan said that if the video was authentic, the White House would be "appalled by the brutal murder of an innocent American." She said the White House expressed its deepest condolences to Kassig's family and friends.

ISIS previously beheaded two U.S. and two British citizens and warned the U.S.-led anti-ISIS coalition that the executions will continue unless Western powers and their allies stop battling the terrorist organization. ISIS militants beheaded James Wright Foley, an American freelance journalist and photojournalist in August and he was the first American whose beheading was announced by ISIS via a video posted online. Steven Joel Sotloff was an Israeli-American journalist for TIME magazine and The Jerusalem Post; his execution was shown in a video on Sept. 2. British citizen David Haines, who was allegedly working in Syria for a humanitarian aid group, was beheaded on Sep. 13, and another British citizen and aid worker, Alan Henning, was murdered on Oct. 3.