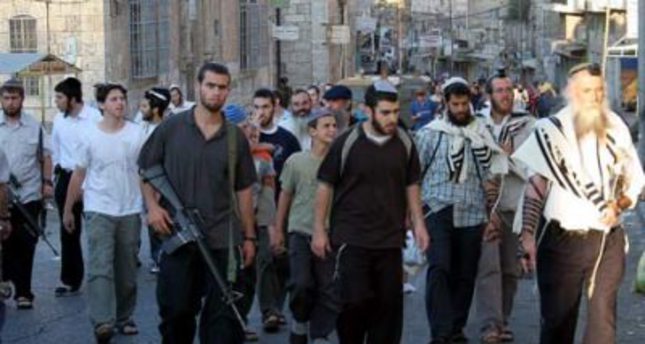 by Daily Sabah with Agencies
Nov 16, 2014 12:00 am
Scores of Jewish settlers on Sunday stormed the Al-Aqsa Mosque complex in occupied East Jerusalem, a Palestinian official said. "As many as 59 settlers stormed the holy compound through Al-Magharbeh Gate under the protection of Israeli police," Sheikh Azzam al-Khatib, director-general of the Organization for Muslim Endowments and Al-Aqsa Affairs, told Anadolu Agency. The settlers wandered through the compound's courtyards, passing through the Qibali and Marawani mosques inside the holy complex before departing through Al-Silsileh Gate, he added. Meanwhile, Israeli police allowed Palestinian men to enter the compound while denying women's entry.

"We performed the noon prayers outside the gates of the compound after we were denied access by Israeli police," one of the women who had been barred from entering the complex told Anadolu Agency. "At least 70 women were barred from entering the complex since the early morning," the woman, who asked to remain anonymous, told AA. Earlier this month, an Israeli police officer was killed when a Palestinian driver ran over a group of Israeli pedestrians in East Jerusalem. The Palestinian motorist was shot and killed on the spot by Israeli police in the immediate wake of the attack. For Muslims, Al-Aqsa represents the world's third holiest site. Jews, for their part, refer to the area as the "Temple Mount," claiming it was the site of two Jewish temples in ancient times.

Although the tension cannot be de-escalated due to Israeli aggression and new illegal settlement plans, Israeli Foreign Minister Avigdor Liberman asserted Sunday that his country will never stop building Jewish-only settlement units in East Jerusalem, dismissing international criticism of the Israeli policy in this regard. "Anyone who dreams that the government of Israel will cave [to pressure] and will limit building in Jerusalem is mistaken," Liberman was quoted by The Jerusalem Post as saying during a meeting with visiting German Foreign Minister Frank-Walter Steinmeier. "We will never accept any definition of building in Jewish neighborhoods in Jerusalem as settlement activity," he went on to say. "There is broad consensus for that stand among Jews in Israel and abroad," Liberman added.

Not only the international community but also Israeli politicians criticized Israeli Prime Minister Benjamin Netanyahu over his policies. Israeli opposition leader and head of the Labor Party Isaac Herzog on Saturday blamed Netanyahu for recent unrest in Israel's Arab villages and towns. "Those who pour oil on the fire should not be surprised by the heat of the flames," Israel Radio quoted Herzog as saying. Clashes erupted between the Arab residents of Kafr Kanna, a majority Arab town in northern Israel, and Israeli police early this month, shortly after Israeli police shot and killed 22-year-old Khair al-Din Hemdan when he allegedly tried to assault a policeman with a knife. The police's account about the shooting was refuted by Arab-Israeli community leaders who cited footage from a security camera that recorded the incident. A general strike was declared in all Arab towns across Israel after event in protest against Hemdan's killing. Herzog attributed the escalation of violence in Arab towns and villages to what he described as Netanyahu's "cynical" threat that Arabs involved in violence would be forced to live in Palestinian Authority-controlled areas in the occupied West Bank.