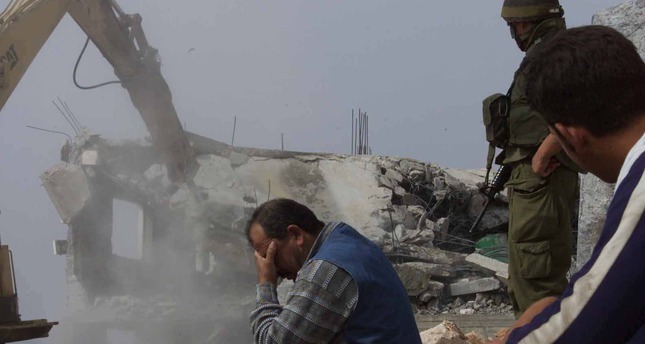 by daily sabah
Nov 18, 2014 12:00 am
Israeli authorities said they have issued home demolition notices to the families of several Palestinians in the West Bank implicated in attacks against Israelis. The military said on Monday that the destruction orders have been issued in the past several weeks. For their part, police say they have targeted several homes in East Jerusalem for destruction or sealing, but are awaiting final government approval before proceeding. Earlier this month, Prime Minister Benjamin Netanyahu said the home destruction policy would be reinstated in response to a wave of Palestinian attacks against Israelis in Jerusalem, mostly against the backdrop of rising tensions over a disputed holy site in the city.

In response to escalating tension by Israel through the approval of new illegal settlements and now the destruction of Palestinian homes, the European Union is considering sanctions on Israel. According to the British newspaper, The Telegraph, a European diplomat said, "We have been increasingly concerned at what we've been seeing. There does not seem to be any possibility of advancement at the moment. There is concern about settlement activity that would have a serious impact on a two-state solution."

"European officials have been alarmed by a series of recent announcements, including the seizure of 1,000 acres of Palestinian land near the Gush Etzion settlement and a decision to press ahead with the expansion of Givat Hamatos, officially in Arab-dominated East Jerusalem, which would potentially block access to the city for Palestinians coming from the southern West Bank," the newspaper reported.

EU countries have been considering recognizing a Palestinian state despite Israel's reaction. On September 30, Sweden recognized the occupied state of Palestine, becoming the first EU member to do so. Prior to the establishment of the union, Bulgaria, Cyprus, Malta, Romania, Poland and the Czech Republic had already recognized Palestine. On October 13, British lawmakers voted in favor of a "non-binding agreement to recognize the state of Palestine alongside the state of Israel as a contribution to securing two-state solution." Also, the French Parliament will hold a voting session on November 29 to recognize the state of Palestine, while the Spanish government has declared that it would consider recognizing Palestine.

Despite the criticism of Israeli policies by the several states, the tension in Jerusalem has not decreased since Israel's illegal settlers and police stormed the Al-Aqsa compound.

Clashes broke out in several neighborhoods of East Jerusalem overnight after a Palestinian driver was found hung late Sunday in an Israeli bus in West Jerusalem, eyewitnesses said. Israeli security forces used stun grenades and tear gas to disperse protesters who threw stones and petrol bombs at the Israeli troops. The protesters were angered by the reports saying that the Israeli police allegedly hinted that the death of the Palestinian driver, identified as Hassan al-Ramouni, was suicide.

It was also reported that a Palestinian in East Jerusalem stabbed an Israeli settler yesterday. There was no immediate report on his health condition, however.