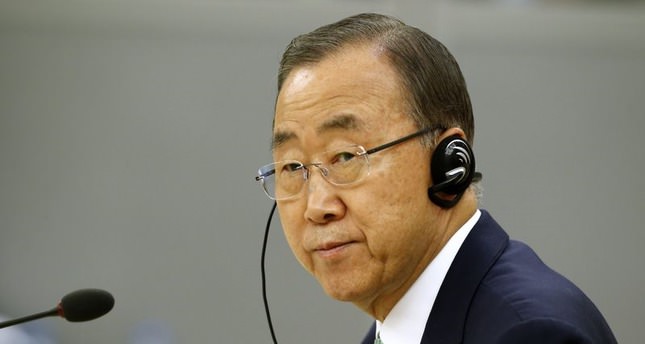 by French Press Agency - AFP
Nov 18, 2014 12:00 am
UN Secretary General Ban Ki-moon strongly condemned an attack on a synagogue in West Jerusalem on Tuesday that left four dead, and lamented a worsening of the situation on the ground.

Two Palestinians armed with a gun and meat cleavers burst into a Jerusalem synagogue on Tuesday and killed four Israelis before being shot dead in the city's bloodiest attack in years.

"Beyond today's reprehensible incident, clashes between Palestinian youths and Israeli security forces continue on a near daily basis in many parts of East Jerusalem and the West Bank," said Ban in a statement.

"The steadily worsening situation on the ground only reinforces the imperative for leaders on both sides to make the difficult decisions that will promote stability and ensure long-term security for both Israelis and Palestinians," he said.

Ban called on Israeli and Palestinian leaders to refrain from using provocative rhetoric that could stoke tensions and lead to violence.