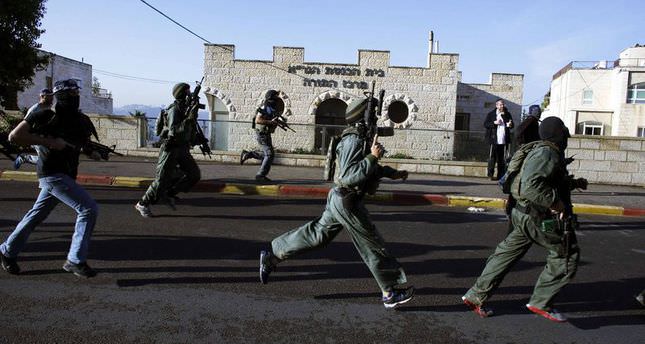 by AA Nov 18, 2014 12:00 am
Leaders from around the world have responded to the killing of four Israelis in a West Jerusalem synagogue.

The incident, in which eight other worshippers were also wounded in an attack by two Palestinian men, is the most lethal incident in the city for years and comes four months after Israel's "Operation Protective Edge" attack on Gaza left more than 2,000 Palestinians dead and more than 10,000 injured.

Israel has also restricted access to the Al-Aqsa mosque in Jerusalem.

U.S. Foreign Secretary John Kerry said: "Palestinians attacked Jews who were praying in a synagogue ... people who had come to worship God in the sanctuary of a synagogue were hatcheted and hacked and murdered in that holy place in an act of pure terror and senseless brutality and murder.

He added the Palestinian leadership "must begin to take serious steps to restrain any kind of incitement that comes from their language, from other people's language, and exhibit the kind of leadership that is necessary to put this region on a different path".

Foreign Minister Frank-Walter Steinmeier said: "The fact that a place of worship has now become the scene of deadly attacks targeting innocent believers is a terrible transgression in an already extremely tense situation.

"What has now happened is a tragedy. I hope that this is also a loud wake-up call."

Turkey's Foreign Minister Mevlüt Çavuşoğlu said: "We condemn the attacks on holy places. We had condemned Israel's attacks on Al-Aqsa Mosque as well.

"We are in a spiral right now; Israel's reckless attitude towards Gaza continues, however there are no excuses for the synagogue attack either."

French president François Hollande's office issued a statement condemning "the heinous attack this morning in a synagogue in Jerusalem and those who dared to welcome the act".

Hollande "expressed his deep concern over the chain of violence in Jerusalem and the West Bank" read the statement on Tuesday.

U.K. Foreign Secretary Philip Hammond said: "Both sides in this conflict need to do everything possible to de-escalate the situation and reduce the tension that we've seen over the past few weeks in Jerusalem, which is extremely dangerous for both Palestinian and Jewish communities in that area."

''It is an act of terror against worshipers at morning prayers and is condemnable by all means,'' Mogherini said in a statement released Tuesday.

''I call on all leaders in the region to work together and do their utmost to immediately calm down the situation and prevent further escalation,'' Mogherini said in the statement. ''I invite all sides to refrain from any action that would worsen the situation by way of incitement, provocation, use of force or retaliation. I utterly condemn all statements calling for or praising such attacks.''

Finland's Foreign Minister Erkki Tuomioja said: "We should do everything that we can to prevent it and stop it, and the most important thing is to come back to the peace process, making the two-state solution possible."

Hamas' spokesman Sami Abu Zuhri said: "The Jerusalem operation was a natural response to Israel's continuous crimes, including the [8-year] blockade on the Gaza Strip."