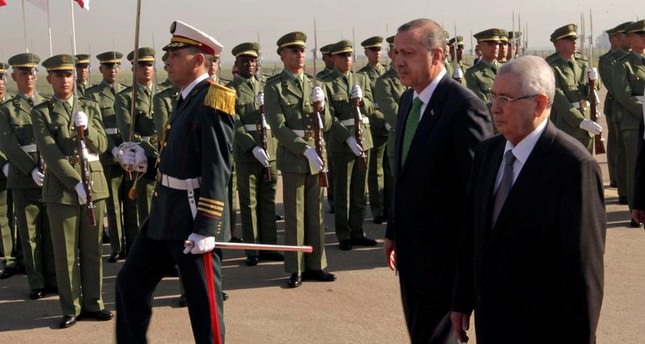 by AA
Nov 19, 2014 12:00 am
Turkey's President Recep Tayyip Erdoğan has arrived Wednesday in Algeria's capital Algiers for an official visit.

Turkey's president commemorated the martyrs who fought for Algeria's independence against the French in a speech at the country's capital. He honored the Algerian martyrs with a moment of silence and laid a wreath on their monument.

Erdoğan is scheduled to meet with his Algerian counterpart Abdelaziz Bouteflika, and to speak to business representatives at the Turkey-Algeria Business Forum along with Prime Minister Sellal.

It was also announced Wednesday that Turkey and Algeria will renew their liquefied natural gas deal, which will expire by the end of 2014.

Among those who came to Algeria with President Erdogan are Deputy Prime Minister Numan Kurtulmuş, Foreign Minister Mevlüt Çavuşoğlu, Minister of Food, Agriculture and Livestock Mehdi Eker, National Defense Minister İsmet Yılmaz, as well as Turkish parliament members, a delegation of businessmen and members of the press.