Two US soldiers killed in bomb attack in Afghan capital 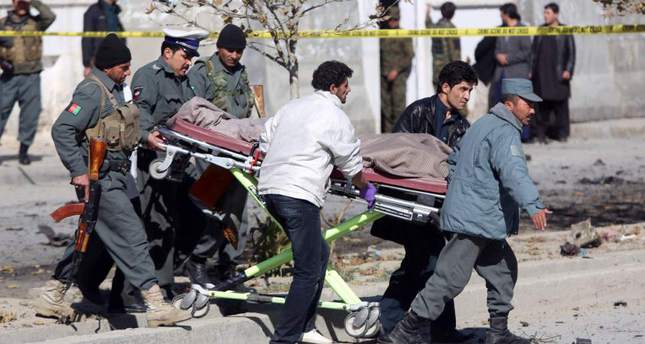 by reuters
Nov 25, 2014 12:00 am
Two U.S. soldiers were killed when their vehicle was hit by a bomb in the Afghan capital Kabul on Monday, officials and sources said. "It was a magnetic bomb," said Interior Ministry spokesman Sediq Sediqqi. "It was either attached to the vehicle belonging to the foreigners or it was planted and detonated remotely." The Taliban insurgents, ousted from power by a U.S.-led coalition in 2001, could not immediately be reached for comment.

The International Security Assistance Force (ISAF), international military coalition in Afghanistan gave no details of the attack but said in a statement two of its service members were killed in the area on Monday. A Western security source told Reuters the victims were American. Another source said at least three civilians were also killed.

In another attack, the suicide bomber, his explosives concealed under his clothes, walked quietly into a packed volleyball venue in eastern Afghanistan. His target: a local police commander. Minutes later, a devastating explosion tore through the place. At least 50 people were killed instantly on Sunday evening when the blast went off at the height of a popular volleyball game in a remote area in Afghanistan's Paktika province. Details of the attack, one of the deadliest in Afghanistan this year, were initially sketchy but as dozens of wounded were brought to the capital, Kabul, to be treated, a clearer picture emerged on Monday of what happened during the tournament. "Around 500 people had gathered there to watch the match. A local police commander and his men also came an hour later," Ghazi Khan, 19, a volleyball player, told Reuters as he lay in a Kabul hospital, his legs and stomach heavily bandaged. "Soon after they arrived the suicide bomber came and detonated his explosives attached to his body. He (the police commander) was the target." Other witnesses echoed the story. "The bomber's target was those government people and local policemen who came to watch the match," said Eid Mohammad, 28, another wounded player.

The Taliban have been increasingly active this year as most foreign troops end combat operations in Afghanistan after more than a decade of war. They are staging frequent attacks against government officials, security forces and international targets. But outright attacks on civilians are rare, and the high civilian death toll from Sunday's attack surprised many Afghans. Officials said most of those killed were spectators who came to watch the match in the remote Yahya Khel district. The local police commander, Bawar Khan, was also killed. Locals said the area where the tournament took place had been under Taliban control until recently and that the Afghan security forces who wrested it back were poorly equipped and faced daily attacks and skirmishes.

The picture is similar elsewhere in Afghanistan where security forces remain too weak to tame the aggressive Taliban insurgency, a worry for the departing U.S.-led forces who have poured billions of dollars into training the Afghan army. "There was no security at the tournament from the beginning," said Mohammad Khan, 19, another wounded local resident. "And bombers usually do not target local civilians unless there are some high-profile government or police officials among them."