Europeans stand up for recognition of Palestinian state 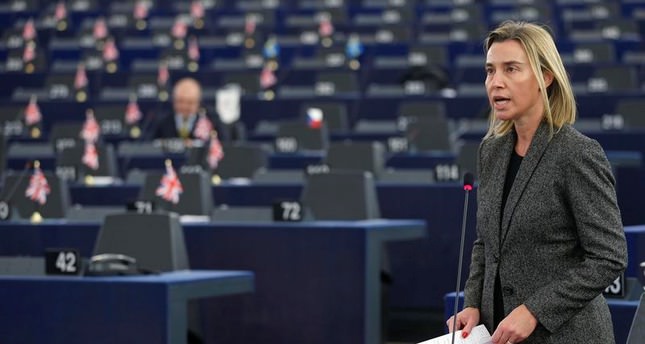 by Anadolu Agency
Nov 26, 2014 12:00 am
Members of the European Parliament have begun debating a common approach among the European Union's 28 member states to recognition of a Palestinian state.

The push for Palestinian statehood has increasingly been brought up in parliaments around Europe, with Sweden last month becoming the 137th of the United Nations 193 member states to officially recognize the State of Palestine.

Whether to recognize a country or not is a decision for national governments. But EU foreign policy chief Federica Mogherini said the trade bloc needs to forge "a united and strong message" to influence events.

The moves come as tension continue to rise between Palestinians and Israelis with frequent clashes and deadly terror attacks erupting -- a reality which led to Mogherini's trip to the area and call in Gaza City on November 8 for the recognition of a Palestinian state.

Naser Khader, a senior fellow at the Hudson Institute in Washington DC, has been visiting the region for the last 20 years and just returned from his latest trip to Israel.

Khader, also the founder of the Democratic Muslims and the Danish political party New Alliance, described the situation as "extremely tense."

"There are extremists on both sides and, right now, both groups are in a terrible state of building-up revenge and counter-revenge. It is escalating, and people in general are fearing a regular new intifada, this time most likely a crazy, 'lonely-wolf' terror scenario," he told The Anadolu Agency.

"There is massive and rising frustration among the Palestinian people over the status quo since the Oslo agreement in 1993, where the PLO (Palestine Liberation Organization) and Israel basically recognized each other, and there was a road to peace in sight," says Khader, who served as a member of the Danish parliament, Folketinget, from 2001 until 2011.

Born in Damascus, Syria, and a Danish citizen since 1974, Khader has been following the Palestinian-Israeli conflict for years.

He said: "It is now more than 20 years since the Oslo agreement, and still Israel controls 60 percent of the West Bank area. Just this weekend, in the year of 2014, I experienced how extreme Jewish settlers -- with thick American accents -- stood on their declared 'God-given right' to 'this piece of land,' being totally aggressive towards both Palestinians as well as visiting tourists.

"They act like madmen, and they are a major threat to both the Israeli and the Palestinian people."

Khader went on: "The heads of pigs are thrown into mosques, stones are thrown at Palestinians passing settlements, and it's literally impossible to get access to the Temple Mount because of these extremists. And this is accepted by the Israeli authorities.

"A Palestinian told me that, today, he is more afraid of the settlers than of the Israeli police and military."

British MPs voted in favor of recognizing Palestine as a state in October, as did the Irish parliament.

Earlier this month, Spain's parliament voted a near-unanimous "yes" to a similar motion proposed by the Socialists, calling on the Spanish government to "recognize Palestine as a state."

There will be a debate in the French National Assembly on November 28, similarly asking the French government to "use the recognition of a Palestinian state as an instrument to achieve a definitive solution to the conflict" and a similar proposal is being brought before the Danish parliament on December 11.

Naser Khader sees these movements throughout Europe as a "people's support" for a demand for a peaceful solution.

He explained: "Everyone knows that there can only be one sustainable solution, a two-state solution. In a few years, the Palestinians will provide a majority of the population, and due to democratic standards, they would then be able to take parliamentary control.

"That's inevitable and will happen in a near-future, and in case the Israelis at that point were to remain in control, the world would have to address it as an apartheid regime, which is unacceptable. So there's really no way around the establishment of a two-state solution, and the need is urgent here and now."

Meanwhile Jeppe Kofod, an MEP for the Danish Social Democrats, told The Anadolu Agency that he is happy about the current debate.

He said: "We are especially looking forward to the next plenary session where we expect a final resolution to be agreed.

"Maybe, with this renewed focus, we can establish enough pressure and support on the parties to finally get the stranded peace negotiations going."