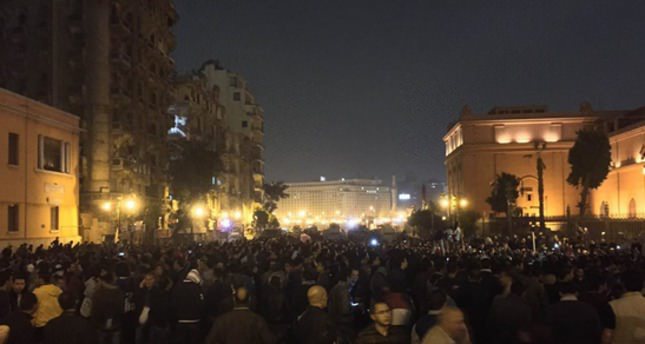 by AA Nov 29, 2014 12:00 am
Egyptian police on Saturday fired teargas to disperse hundreds of people who gathered in central Cairo's Tahrir Square to protest against a court ruling, dropping charges against ex-president Hosni Mubarak that he incited the killing of demonstrators in early 2011, eyewitnesses said.

They said the policemen besieged the demonstrators before they fired the teargas and water cannons forcing them to run away and seek hiding on streets in the vicinity of the square.

The demonstrators converged on the square, the iconic center of the 2011 revolution against Mubarak, earlier in the day to protest against the court ruling, which dropped charges against Mubarak, his interior minister and several Interior Ministry officials that they killed demonstrators during the January 2011 uprising that ended Mubarak's autocracy of three decades.

Mubarak, his interior minister and the Interior Ministry officials were sentenced to life in prison [25 years] in 2012 on charges of killing demonstrators during the revolution in 2011.

A retrial was, however, scheduled, but the charges were dropped on Saturday, opening the door for mixed reactions from Egyptians. Mubarak's backers cheered the ruling.

Protests also erupted in other provinces against the ruling, including in the coastal city of Alexandria and in the Suez Canal province of Ismailia.

The Interior Ministry, meanwhile, said that policemen had to disperse the Tahrir Square protest when members of the Muslim Brotherhood, the movement from which ousted president Mohamed Morsi hails, joined in.

Ministry spokesman Hani Abdel-Latif told the private Sada al-Balad channel that the Muslim Brotherhood members had joined in the protest and then clashed with the "peaceful protesters."

Morsi was ousted in July of last year by the military, but his supporters have been staging protests against his ouster since then.