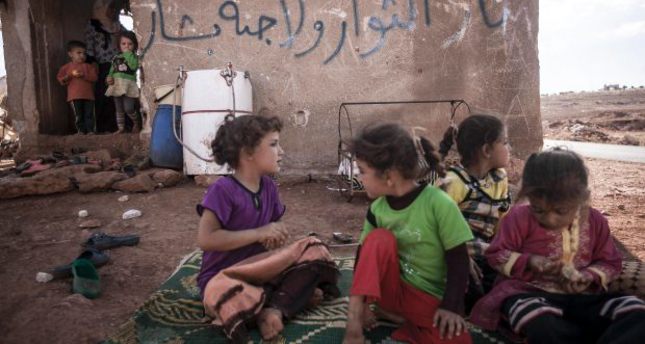 Hundreds of thousands of stateless Syrian children born in exile after the civil war in Syria broke out in 2011 are unable to acquire a nationality.
Their status as stateless individuals puts them at risk of violence, abuse and exploitation as they are not protected by rights guaranteed by a recognized state.

More than 50,000 Syrian children have been born in exile in neighboring countries, Lebanon, Jordan and Turkey, according to the U.N. refugee agency's figures. Yet, many of those are unregistered children as no country recognizes their childrens existence because they are not able to acquire documentation which proves they are Syrian nationals. "Unless this can be resolved at a later date, these children may be left stateless," the UNHCR Director of International Protection Volker Türk said in a statement released on Nov. 4.

Many Syrian children do not own identity cards due to the fact that their birth registration, which provides a child's legal identity, has become a crucial issue in refugee camps in Lebanon and Jordan. "Birth registration is a right of all children under international law," said the U.N. refugee agency, stressing the importance of legally obtaining a birth certificate in their host country.

However, the levels of birth registrations remain extremely low.A UNHCR survey, called "The Future of Syria," revealed that 77 percent of the 781 refugee newborns did not have an official birth certificate in refugee camps in Lebanon. "As of Oct. 31 2013, 291,238 Syrian refugee children were living in Jordan and 385,007 in Lebanon," and the majority of those face the threat of statelessness, thus they suffer from severe restrictions on their rights and freedom of movement.

With many Syrian families having fled their home to take refuge in host countries, many of them have no documention to prove their marriages. Jordanian and Lebanese authorities require valid marriage documentation for Syrian parents before registering a newborn.

Touching on the growing number of children born without child birth registration in exile or refugee camps, the U.N. refugee agency said, "A stateless child is born every 10 minutes in just five countries." . As the world suffers from a growing number of stateless people, the U.N. has launched a global campaign, "I belong," in a bid to urge countries to take action to end statelessness within 10 years. The campaign aims to draw attention to the devastating life-long consequences of statelessness. "Statelessness makes people feel like their very existence is a crime," said the U.N. High Commissioner for Refugees, Antonio Guterres. "We have a historic opportunity to end the scourge of statelessness within 10 years, and give back hope to millions of people. We cannot afford to fail this challenge," he noted.