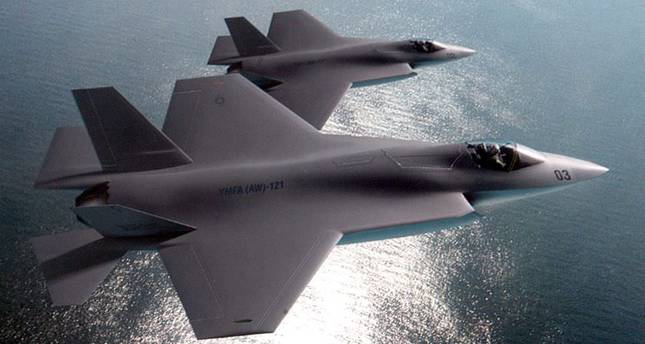 by Daily Sabah Dec 02, 2014 12:00 am
Israel has purchased a second batch of 31 U.S.-made F-35 fighter jets despite criticism over budget concerns from top cabinet members. However, Israeli authorities have said that the process is staggered over the next three years, Reuters reported. The preliminary agreement on the 31 F-35 fighter jets was made in November between the U.S. and Israel. Under the agreement, Israel is expected to receive 14 aircraft at the end of 2014 and 17 in 2017.

The high cost incurred from buying F-35s has received significant criticism from some Israeli ministers, with the Israeli government currently suffering from budget concerns that have been on the rise since the 50-day conflict in the Gaza Strip. While the Israeli Defense Forces (IDF) launched large airstrikes in the occupied Palestinian territories, Israel's cabinet approved the 2015 budget in October, indicating that it would include extra defense spending. A one-time payment of 4.3 billion shekels to the Israeli Defense Ministry was allocated in order to fight against Hamas.

During the 50-day conflict, thousands of homes in the Gaza Strip were destroyed and more than 2,100 Palestinians were reportedly killed during the violent Israeli onslaught. Despite the volatile cease-fire, no peace solution has been able ease the tension, with sporadic events emerging after the Gaza truce.

Meanwhile, a Palestinian woman in Jerusalem was shot dead by Israeli police after she stabbed and slightly wounded an Israeli civilian. "A Palestinian female youth attempted to stab an [Israeli] soldier at the Gush Etzion junction, which left an Israeli citizen with extremely minor wounds that didn't require transferring him for treatment," the Israeli police spokeswoman Luba Samri said in a statement, according to Anadolu Agency. "Israeli army forces fired at her causing, what has been said to be, severe wounds and she was transferred to the Hadassah Medical Center [in West Jerusalem]," she added.

The murder is yet another sign that the tension between Israelis and Palestinians has soared in recent months after Israel insisted on closing the al-Aqsa compound, a Muslim holy site. After the Israeli move to define Israel as the national home of the Jewish people, excluding the Palestinian community under the Jewish state bill, tension flared up between the two communities with peace proving hard to maintain. The recent situation in Jerusalem is another example that both communities have had to resort to violence with no compromise in sight to help ease the tension.