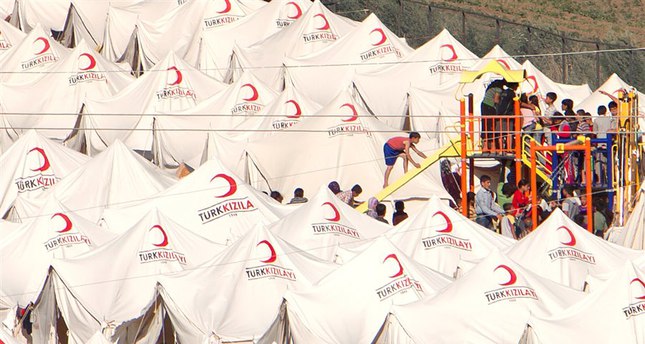 Amid the latest developments in the Middle East, the reluctance of Western countries and international organizations to address the issues has been harshly criticized by academics and humanitarian organizations around the world

On Jan. 29, 2014 Prime Minister David Cameron of the U.K. said, "The U.K. will act with the greatest urgency in offering the most needy people in Syrian refugee camps a home in our country." After almost a year, U.K. immigration numbers were announced last Thursday and showed that the country accepted 100 refugees. In an open letter to Cameron, more than 30 aid organizations including Oxfam, Save the Children, Amnesty International and the Refugee Council criticized the U.K. government for its reluctance in the Relocation Program. This program includes five years of humanitarian aid to Syrians who flee to Britain. As thousands of Syrians have made applications through the relocation program, only a small part of them are allowed to take temporary shelter in the U.K.

Speaking to Daily Sabah, Dawn Chatty, professor of anthropology and forced migration at Oxford University, said the U.K.'s attitude is unacceptable: "Politicians are responding to the fears of the population in general and of course there is a very strong anti-immigrant feeling within the country and of course the politicians in power are very afraid to support more immigration to the country. However, if there were a proper communication and the recognition that the British government has a responsibility to at least provide temporary protection for refugees from Syria considering the role the British have had in the region for at least the last 100 years. Until now, they have spent $700 million on aid to the countries around Syria and also within Syria. They feel that by spending money they are keeping the problem far away. I think this is very inappropriate." Criticizing the U.K.'s Relocation Program, Chatty said, on the other hand, that Turkey stands out when it comes to the refugee problem because of its open door policy.

Chatty, who spent two weeks in Turkey and visited the refugee camp in Nizib, said that compared to the refugee camps set up by the U.N. High Commissioner for Refugees (UNHCR), camps in Turkey provide high level services. "What is particularly different from other refugee camps around the world which have been set up by UNHCR, is there is freedom of movement both in to and out of the camp, which increases the individual persons sense of social freedom and dignity. International Crisis Group calls the camps in Turkey Five-Star camps. They are set out to protect the dignity of refugees. The schools are very well-run in the camps, the opportunities for assembly for young people, also for internship and training in various possible professions, are very well-run. Sports facilities are [also] very good. That means more than a quarter of refugees are very well looked after. They have been given dignity that you can't find in the rest of the world."

Until today, Turkey has spent around $4 billion on the refugee crisis and close to 2 million people have sought refuge in the country. This is almost half of the total number of refugees who fled from Syria since the conflict began.