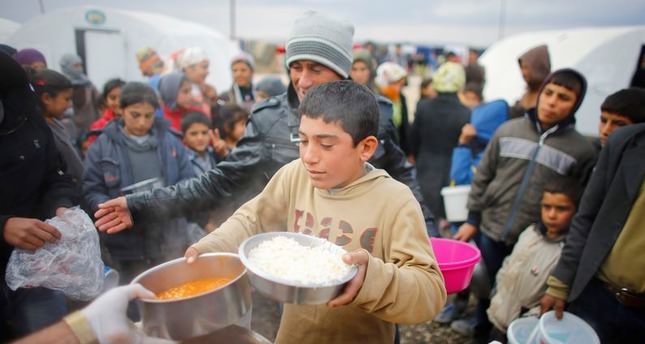 The text message arrived on Syrian refugee Abu Mustapha's phone on Wednesday morning, two days after the WFP announced that it had run out of money to provide food aid to 1.7 million destitute Syrians in neighbouring countries.

The UN agency has responded by launching a website where individuals can make one dollar donations, hoping it will receive enough to make up the shortfall.

"We were shocked to read these messages this morning... especially now that we and our families are already suffering from various cuts," Abu Mustapha said by phone from the Bar Elias camp in eastern Lebanon.

"Now with the winter season this will add to our ordeals," he said.

The WFP office in Lebanon confirmed that the messages were sent to registered refugees this morning.

"This means the whole world is getting ready to stop helping us," Um Ahmed, a Syrian mother of seven living in Beirut, told DPA.

The WFP aims to close its funding gap of 64 million dollars by collecting the sum from as many donors within three days.

"For you it's a dollar, for them it's a lifeline," WFP Executive Director Ertharin Cousin told potential benefactors.

The UN agency needs this sum to support Syrian refugees in neighbouring countries with food vouchers during December.

"For refugees already struggling to survive the harsh winter, the consequences of halting this assistance is devastating," WFP said.

Meanwhile, the German government said it had increased its Syrian refugee aid by 40 million euros (50 million dollars), to fund not only food vouchers, but also polio vaccination, emergency aid and protection against the winter.

"We can't let families go hungry and cold just because aid organizations don't have money to care for them," German Foreign Minister Frank-Walter Steinmeier said on the sidelines of a NATO meeting in Brussels.

WFP has said it has still enough food to feed people inside Syria until the end of January but risks running out there as well, as funding from donors has dried up.