Assad: 'If passengers need to leave, I'll be the last to go' 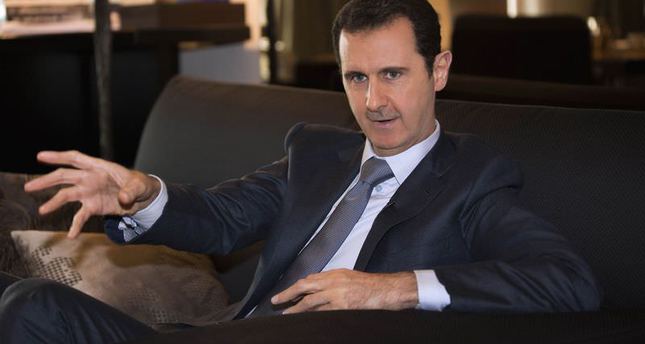 Syria's conflict will be long and difficult and its army cannot be everywhere at once, President Bashar al-Assad said in an interview published by a French magazine on Thursday, in which he also vowed to remain in power.

Assad told Paris Match no one could predict when the war with insurgents seeking to oust him would end but said enemies had failed to win over the population, allowing the military to advance.

In extracts published on Wednesday, Assad also said U.S.-led air strikes in Syria since September were an "illegal intervention" that had made no difference in the fight against ISIS militants who are fighting government forces.

"The Syrian army cannot be everywhere at once. Where it is not present, terrorists take the opportunity to cross borders and infiltrate in one area or another," said in the French language magazine in comments translated by Reuters.

"It is not about a war between two armies, where one occupies a territory and the other another one. It is another type of war. We are dealing with terrorist groups that infiltrate a town or village. So this war will be long and difficult."

The text was also carried by Syrian state media on Thursday.

The uprising against Assad began as peaceful pro-democracy street protests in March 2011 and gradually evolved into civil war after a fierce crackdown.

Assad said the army was progressing in many regions. Asked whether he saw his departure as the solution, he said:

"The state is like a ship: the captain does not escape in the storm. He does not quit the deck. If passengers need to leave, then he is the last to go."

He disputed a United Nations estimate that the conflict had killed nearly 200,000 people since 2011, saying figures in the media were exaggerated.

He also dismissed the idea Syria's military had allowed ISIS to flourish earlier in the war to wipe out other insurgents and suggested the United States had helped create it.

"In reality, ISIS was created in Iraq in 2006. It was the United States which occupied Iraq, not Syria," he said, adding the group's leader was jailed in a U.S.-run prison there. "So who created ISIS? Syria or the United States?"

He said Syrian forces had not used chemical weapons because they had more efficient arms to fight "terrorists." Rebel groups, the United States and its allies accuse Damascus of carrying out chemical attacks.