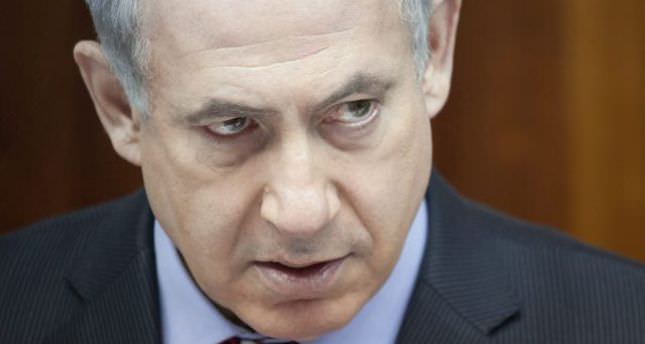 by Daily Sabah Dec 04, 2014 12:00 am
Israel's Prime Minister Benjamin Netanyahu does not like to be criticized.

"I will not tolerate any opposition in my government," he said in a statement after firing Finance Minister Yair Lapid and Justice Minister Tzipi Livni yesterday. "I won't accept ministers attacking the policy and head of the government from within." Netanyahu believes the ministers were plotting a "putsch," claiming they were joining forces to overthrow him after their frequent criticism of Netanyahu, who accused his ministers of making the government unmanageable.

The statement said he would call for the dissolution of parliament as soon as possible, in the hope of receiving a "clear mandate" to lead Israel. The decision to sack the ministers and dissolve parliament was stirred by the ministers' strong disapproval of the Jewish state bill. The bill would strengthen the Jewish nature of the nation, which critics say is undemocratic and would greatly harm the Arab minority in Israel.

The prime minister called out to the citizens of Israel, saying, "My responsibility as prime minister is to lower the cost of living and to take care of you." Ironically, Netanyahu set conditions at Monday's meeting for keeping the current government in power, which supported freezing the zero value-added tax plan involving the provision of inexpensive, new apartments for first-time home buyers - a condition Lapid rejected, considering it is his flagship initiative.

Lapid heads the centrist Yesh Atid party, while Livni chairs the similarly centrist HaTnuah. The two parties account for 25 of the coalition's 68 seats. Danny Danon, chairman of Netanyahu's Likud party, hopes to fill these seats in the near future with "loyal and like-minded parties that are interested in serving as true partners in leading our great country."

Even though Netanyahu's popularity is heading down hill, current polls suggest he could win sufficient votes to form a new coalition that is far right. An extreme right-weighing coalition would mean major emphasis on Jewish settlement and Jewish-oriented legislation. With the support of the ultra-orthodox haredi parties, he would not have to depend on the centrist parties like he does in the current coalition.

"The firing of ministers is an act of cowardice and loss of control," Lapid said after his dismissal. Livni also accused the prime minister of being a coward, saying "he didn't even dare look me in the eye to fire me." Livni went further, saying her dismissal is a removal of the "gatekeeper of Israeli democracy."