US claims ISIS uses Libya as training base 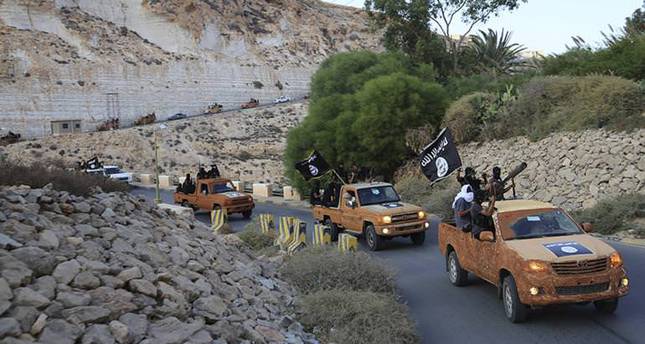 ISIS could be training militants in Libya, a country that has suffered from instability and a lack of central power since NATO operations ousted Gen. Gadhafi

Libya is on the brink of collapsing into a failed state as the security situation continues to deteriorate due to deadly ongoing clashes between rival militias that threaten to tear the country apart. In the vacuum of Libya's political chaos, major armed militia groups have attempted to seize control of vast areas. The two main armed militias, Zintanis and Misratans, have been fighting to seize control of key installations, including the international airport. Libya suffers from a chronic lack of security, with various independent actors emerging. The powerlessness of the central authorities has led many people to take up arms against the government. State security forces have also failed to protect the government, leaving the country unprotected and open to heavy clashes between rival militias battling to gain control over the government and the country. Peace and political stability is no closer to being achieved, as no rival militia group has been strong enough to put an end to the ongoing war. Among the major militia groups is Ansar al-Sharia, a Salafist militia that emerged in June 2012 and was formed by Mohamed al-Zahawi, who fought in Afghanistan. They demand the establishment of a state ruled by Shariah in the eastern city of Benghazi, and have been fighting with Libyan army brigades and forces loyal to General Khalifa Haftar for months. The Libyan National Army, led by Haftar, which rejects the authority of the central government, is seen as a major force against some of the militias. The central government, in a state of continued turmoil, has long been at the mercy of militias hoping to integrate and build a national army against the interim government. After Moammar Gadhafi's ousting following a NATO operation, the army has disintegrated, the central government has gradually lost its power, and is unable to make any impact on the ongoing violent clashes between armed forces loyal to Haftar and militia groups that serve as part of Libya's regular army in Benghazi.

Due to the country's instability and insecurity, the Islamic State of Iraq and al-Sham (ISIS), which is allied with the other radical elements in the country, has started using Libya as a base for training its militants. Army General David Rodriguez, head of the U.S. Africa Command, on Wednesday said that the U.S. and Libyan central government are monitoring the activities of ISIS in Libya. "We are watching it very carefully to see how it develops. Right now it's just small and very nascent and we just have to see how it goes," he said. He added that it is not clear whether these militants are directly linked to ISIS, as there are many radical armed groups in existence in the chaotic country. "It is mainly about people coming for training and logistics support right now, for training sites, and that's what we see right now. As far as a huge command and control network, we have not seen that yet," Rodriguez said. "The numbers are somewhere around a couple of hundred. But again we do not have a specific, precise assessment of that right now," he said. Istanbul / Daily Sabah