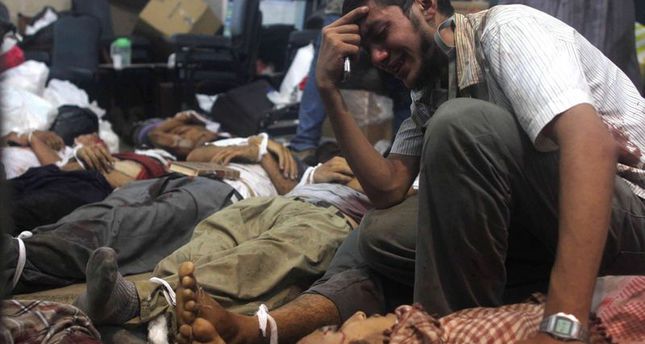 Former Morsi staffer detained for over 500 days in solitary confinement in a 2-square-meter, insect-infected cell reaching temperatures of 45 C

Sarah Attia has had enough, yet not enough is being done. Attia is the wife of Khaled al-Qazzaz, a former staffer of Egypt's first democratically elected president, Mohammed Morsi, who was ousted in a bloody military coup that took place on July 3, 2013. Detained along with thousands of other Morsi supporters, Qazzaz has been jailed for over 500 days without charge. For the first five months of his detainment no one knew where he was being held or whether or not he was alive.

During his time in Cairo's notorious, maximum-security Tora Prison where Mohamed Fahmy and two Al-Jazeera colleagues are also imprisoned, his faith in God strengthened as his physical health weakened. Qazzaz is in critical medical condition that calls for surgery to avoid the risk of permanent paralysis. Even though he has been moved to a hospital for some time now, his treatment has been on hold due to paperwork approvals.

Qazzaz's family constantly receives news of the never-ending cycle of judges postponing the decision on his release. "Although we continue our routine, every minute of my day I am reminded of the injustice that my family is living through," Attia said, adding: "It never gets easier. The longer this goes on, the more painful it is, and the more my kids and I miss their father."

Salma Ashraf, current director of Egyptian affairs at the Human Rights Monitor, sent the UN a report of Morsi and his aides' arrests when she was at the Alkarama Foundation in Cairo. The UNHRC called for Qazzaz's immediate release shortly after his unlawful detainment, but neither the UN nor Egyptian authorities took any action.

"In Egypt's current situation, we know they won't respond to the United Nation's call for release," Ashraf said. "When the UN released their statement, we tried using it in local courts, but Egypt is being governed by corruption, so it's not very surprising."

Meanwhile, the Canadian embassy has followed the case closely and has helped Attia's family. "The Canadian government has expressed concern over our case, and I hope that they will continue to secure Khaled's release," she said. Qazzaz is a permanent resident of Canada, and his wife and four children, aged two to eight, are Canadian citizens.

"My kids have been deeply affected," said Attia. "They ask about their father all the time. They miss him very much."

"I'm sure Sarah's family is facing great emotional distress," said Ashraf. "The children only suffer knowing their father was a good man, but don't know why they're not with him."

Abdelrahman, the eldest, is the most affected. He does not like to speak about his father and is constantly sad and distant. Six-year-old Amena often wakes up during the night, confused about what is happening. Every day, Attia tries to make them feel safe and hopeful, reminding them that their father was a hero. Attia left Egypt in an attempt to reach out to the world, and now, going back with her children is considered risky.

Prior to al-Qazzaz's arrest, he worked as an educator who founded an international school, and in 2012, he began his position as the secretary to the president for foreign relations, where his focus was on human and women's rights.

"My husband believed in democracy, human rights and a positive contribution to the world," Attia said. "We hope that he comes home soon." Friends and family have come together to start the Free Khaled al-Qazzaz campaign, continuing to advocate until he is released.

"Khaled's family is probably worried about whether he'll be released or if he'll receive a made-up sentence," said Ashraf. There are more than 240 innocent detainees whom were sentenced to execution since the coup, on the basis of fabricated charges without a fair trial.

There was a citizen who died in prison in Egypt on Human Rights Day on Wednesday, which according to Ashraf, "reassures that there's no such thing as human rights in Egypt."

Despite this, for Attia, hope speaks louder than despair. "Human rights day is a reminder of the vast human rights violations that are taking place world wide. But it's also a day of hope where human rights workers and human rights defenders, like my husband Khaled, are remembered."