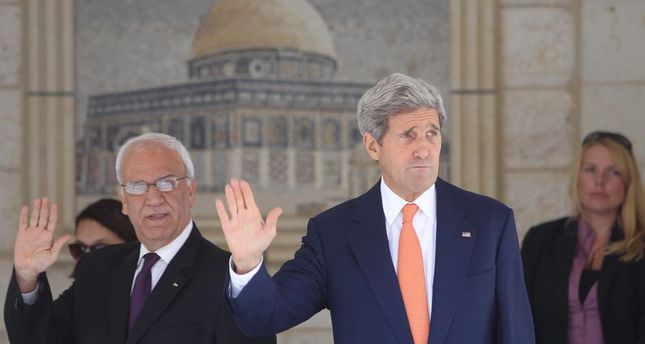 by AA Dec 14, 2014 12:00 am
The Palestinian Authority (PA)'s chief negotiator Saeb Erekat said that he will meet U.S. Secretary of State John Kerry in London on Tuesday, a few days before the Palestinians are expected to push for a UN Security Council resolution to set a timetable to end Israeli occupation.

The meeting-which Kerry requested-will tackle the latest developments in the political process between Palestinians and Israel, Erekat told the Palestinian radio Sunday.

Erekat also stressed that the PA will submit the draft resolution to the UN Security Council within days as scheduled to end the Israeli occupation.

"The draft could be proposed in blue in the Security Council on Monday, and the PA will hold a meeting tonight to decide on when to begin international action, such as proposing the draft resolution and reconsidering the economic and security ties with Israel," Erakat said.

In the UNSC, a draft resolution is submitted in blue text when it approaches the final stage of negotiations.

Erakat also noted that the PA will not accept any draft that doesn't include ending the Israeli occupation.

According to Palestinian sources, Kerry had requested to meet with PA President Mahmoud Abbas in London, but the latter declined and sent representatives in his stead; Erakat and Palestinian intelligence chief Majid Faraj.

The Palestinian draft resolution will seek to apply the "two-state solution," providing the Palestinians with an independent state within pre-1967 borders with East Jerusalem as its capital, according to recent statements by Abbas.

The draft resolution is expected to be submitted by the end of December.

Peace talks between Israeli and Palestinian negotiators collapsed in April of this year over Israel's refusal to release a fourth group of Palestinian prisoners despite earlier pledges to do so.

The talks aimed to find a solution to the Palestinian-Israeli conflict, the roots of which date back to 1917, when the British government, in the now-famous "Balfour Declaration," called for "the establishment in Palestine of a national home for the Jewish people."