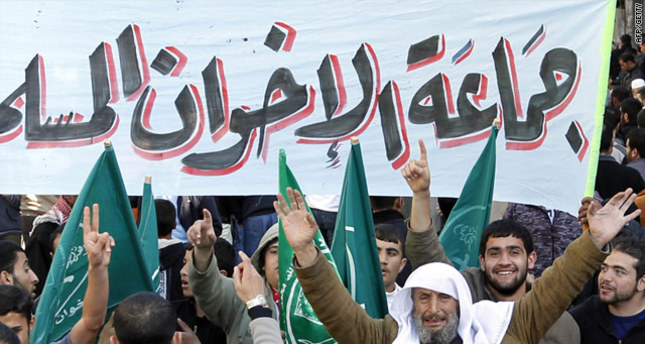 by Daily Sabah Dec 15, 2014 12:00 am
Egyptian President Abdel-Fattah el-Sissi, who led a military coup last year that ousted Egypt's first democratically elected president, was in Jordan for his first official state visit on Thursday. Jordan's King Abdullah II and Sissi discussed the threats they face from so-called "Islamic terrorism," along with the Palestinian-Israeli peace process and its latest developments.

Egypt and Jordan stand on similar ground, as they are both allies to the U.S. with strong relationships with Saudi Arabia and the Unites Arab Emirates (UAE). A glaring difference however, is that Egypt has labeled the Muslim Brotherhood as a terrorist organization, unlike Jordan where it has been accepted for a long time. In an interview with U.S. interviewer and broadcast journalist Charlie Rose, Abdullah said the Muslim Brotherhood was an official organization in his country. Over the past few months, however, the relationship between the Muslim Brotherhood and the Jordanian government has taken a wrong turn. King Abdullah said on Saturday that the Brotherhood has "hijacked" and taken the place of the youth who launched the Egyptian revolution.

With tensions on the rise, Jordanian authorities arrested a senior leader of the Muslim Brotherhood, Zaki Bani Rushaid, less than a month ago for criticizing the UAE. According to brotherhood officials and local media reports, Rushaid was arrested on charges of harming relations with a friendly country.

The two leaders, Sissi and Abdullah, discussed "boosting the brotherly and historic Jordanian-Egyptian ties and strengthening strategic cooperation," a Jordanian government statement said. Paradoxically, "brotherly ties" and cooperation mean that Egyptians still need prior permission and a security clearance to travel to Jordan and other countries including Turkey, Syria and Iraq.

Meanwhile in Egypt, the prosecution referred 438 supporters of pro-democracy supporters to a military court over violence-related charges that are mostly fabricated or exaggerated. The cases were taken to a military court instead of a civilian court because Sissi ordered in October for the army to guard public institutions for two years. During this time, civilian facilities would be treated as military facilities.

Human Rights Watch warned against this a month after it was declared because of the risks of "militarizing" the prosecution of protestors and political opponents. They said that the military courts usually deny citizens their rights given to them by civilian courts, including basic procedures such as informing them of the charges upon arrest and the right to a lawyer.

Since the coup in Egypt, human rights organizations have been waving the red flag regarding violations that occur on a daily basis.