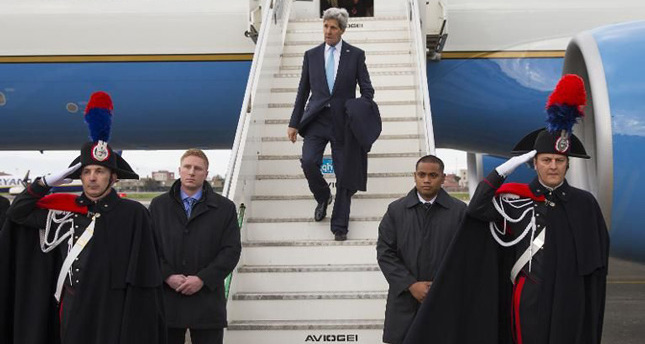 by Daily Sabah Dec 16, 2014 12:00 am
U.S. Secretary of State, John Kerry, is once again attempting peace talks between Israel and Palestine. The question of whether it will be a success is an easy one to answer, considering the countless failed attempts in the past.

Resorting to the all-too-familiar two-state solution strategy, Kerry said at a Brookings Institution forum last week, that "there should be no question that a two-state solution – yes, a two-state solution – is the only path to peace for the simple reason that there is no one-state alternative that is viable, or that would preserve Israel's status as a Jewish state and democracy." Kerry met with Israeli Prime Minister, Benjamin Netanyahu, in Rome on Monday to discuss the different propositions for a Palestinian state that are circulating at the United Nations. He then flew to Paris to meet with representatives of various European countries, before traveling to London to meet Palestinian and Arab League officials today.

Kerry led the failed peace talks in the spring, which ironically resulted in more conflicts arising the following summer, leading to the ground invasion of Gaza, causing approximately 2,000 deaths. Since then, Palestinians have constantly called on the United Nations to form their own state in the seized West Bank and the Gaza Strip, with East Jerusalem as its capital. Israeli Prime Minister, Benjamin Netanyahu, said he would reject any motions pressing the United Nations Security Council to set a negotiating deadline for a retreat from Palestinian territory.

Although the U.S. appears to be playing the role of neutral moderator, it agrees with Israel that "one-sided" steps, taken by any side, are considered destructive. This includes the recognition by Sweden and several other European countries of Palestine as a state. Despite U.S. efforts to reconcile both sides along with the criticisms from the U.N., the Jewish settler population has more than doubled since peace talks began.

Netanyahu made his view clear on Sunday during the Israeli cabinet meeting. "This is an attempt to compel us — by means of U.N. decisions — to withdraw to the 1967 lines within two years," he said.

Israel seized the West Bank in the 1967 war, while Palestinians say that Israeli construction there is illegal—an opinion that is globally supported. Tensions are already on the rise after a Palestinian cabinet minister was killed last week after a clash between protesters and Israeli forces in the West Bank. The tensions are deeply rooted within the cabinet itself, with Israel caught up in early elections, after Netanyahu fired two ministers earlier this month for opposing his pro-settler policies. Three months from now, Israelis will go to the polls to elect a new government, which could result in a more extremist and right-wing way of thinking than the current management. During these elections, more than two million Palestinians will not be allowed to vote. Peace talks, as difficult as they are now, could virtually become impossible with Netanyahu pushing for more Jewish settlements.