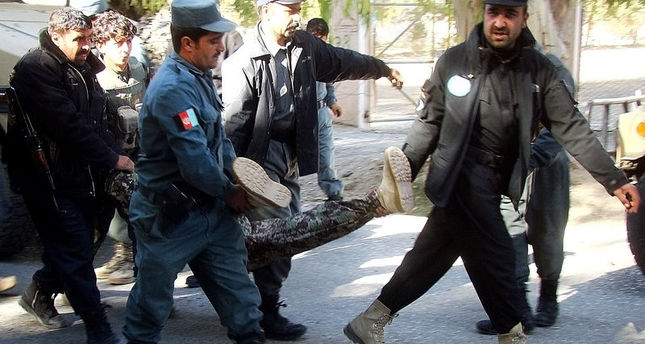 by Associated Press Dec 17, 2014 12:00 am
Afghan insurgents stormed a bank in the country's restive southern province of Helmand on Wednesday, killing at least 10 people, including three policemen, authorities said.

In the attack, in the provincial capital, Lashgar Gah, five suicide bombers raided the city's branch of the New Kabul Bank. One of the attackers blew himself up at the front entrance to allow the other four in, said Omer Zawaj, the spokesman for the provincial governor.

Once inside, the other attackers fired at security forces, which arrived at the scene and surrounded the building, Zawaj said.

"There are also 15 people wounded, including six members of the Afghan security forces," he said, adding that the rest of the insurgents were killed in the gunbattle.

Earlier, the head doctor at Lashkar Gah hospital said that more than 20 people with gunshot wounds had been admitted. "We've also had five bodies brought in," said Aslan Nawaz.

The attack came a day after members of the Pakistani Taliban attacked an army-run school in Peshawar, murdering more than 141 people, most of them students.

The Afghan Taliban condemned the attack, saying killing innocents was un-Islamic. The Afghan group, however, claimed responsibility for a deadly attack on a French-run school in Kabul last week, in which a German aid worker was killed.

In the eastern province of Nangahar, the chief police spokesman Hazrat Hussain Mashraqiwal said that 11 insurgents were killed in a drone strike on Tuesday.

They were in a vehicle when the drone struck, he said, adding that the dead included two insurgent commanders.

Afghanistan's war with the insurgents, whose leadership is based in Pakistan, has escalated in recent months, and angered President Ashraf Ghani who has vowed to bring peace to the country.