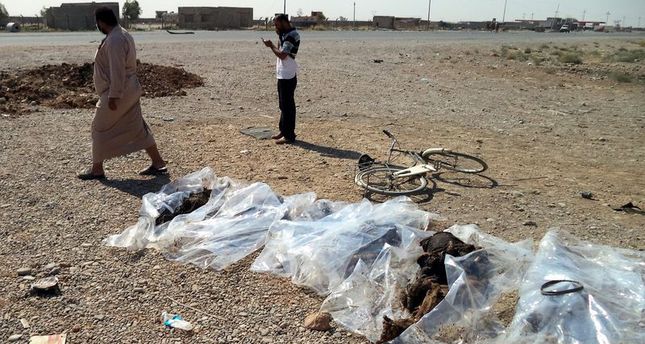 by AA Dec 20, 2014 12:00 am
The Kurdish Peshmerga forces found a mass grave on Saturday, which contains the bodies of 70 Ezidis in northeastern Sinjar near Mosul, northern Iraq, according to an Ezidi activist.

"A patrol of Peshmerga forces has found a mass grave of 70 Ezidis, including women and children corpses in a village located 22 miles from northeastern Sinjar town," human rights Ezidi activist Lokman Mirzo, told The Anadolu Agency.

"They were executed by shooting and we recognized the corpses to be Ezidi from their clothes," Mirzo added.

The Kurdish Peshmerga forces managed to defeat the ISIS militants, after three days of clashes and took control of Iraq's Sinjar town west of Mosul on Saturday, which is home to many Ezidi Kurds.

The Ezidi population is estimated at 600,000 and a number of Ezidi minority groups live in Turkey, Syria, Iran, Georgia and Armenia.

Iraq has been gripped by a security vacuum since June, when ISIS militants stormed the northern province of Mosul and declared what it called a caliphate in Iraq and Syria.
Last Update: Jan 08, 2015 3:37 pm
RELATED TOPICS