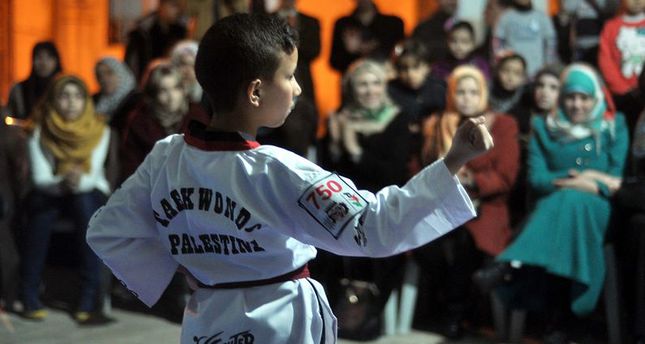 by AA Dec 20, 2014 12:00 am
A Palestinian sporting club has held a Taekwondo tournament that carried the name of one of nine Turkish activists killed by Israeli forces while on board a Gaza-bound Turkish aid flotilla in 2010.

The tournament - which was named after Çetin Topcuoglu, a former taekwondo athlete himself - was held in Gaza City and sponsored by the Turkish Humanitarian Relief Foundation (IHH).

"The IHH sponsored the tournament to reaffirm the depth of ties between the Palestinian and Turkish peoples," Mohamed al-Amsi, an official at the Palestinian Olympic Committee, told The Anadolu Agency.

"Around 50 children between ten and 14 years old partook in the competition," he added.

IHH representative Mehmet Kaya, for his part, said the decision to name the event after Topcuoglu showed that the Palestinian people had not forgotten the Turkish activists who fell when Israel raided the aid flotilla.

"And we, Turks, thank our brothers in Palestine and promise to do our utmost to support them," Kaya told AA.

In May 2010, Israeli commandos killed eight Turkish nationals and an American citizen of Turkish origin in a raid on the Mavi Marmara aid ship in international waters.

The ship had been part of the "Gaza Freedom Flotilla," which had carried humanitarian aid and construction materials for Palestinians in the blockaded Gaza Strip.
Last Update: Dec 21, 2014 9:53 am
RELATED TOPICS