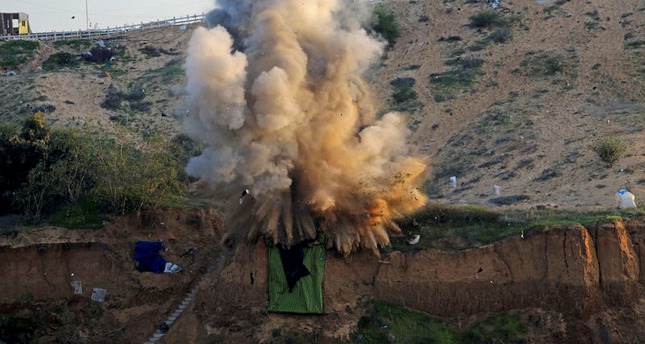 by Anadolu Agency Dec 20, 2014 12:00 am
Israeli warplanes hit Gaza for the first time late on Friday since an August truce ended 50 days of Israeli offensive on Gaza.

The two strikes on empty plots in southern Palestinian enclave caused power outages in nearby residential areas as well as a wide state of panic among Palestinian civilians.

No casualties were, however, reported from the strikes.

The Israeli army, meanwhile, claimed that the air attacks were launched in retaliation for a rocket attack on southern Israel on Friday.

Deputy Head of the Political Office of Palestinian faction Hamas, Ismail Haniyeh, denounced the "dangerous violation of the ceasefire" by Israel and called on Egypt to put pressure on Israel to abide by the terms of an August 26 Gaza cease-fire deal.

"The Palestinian people are resilient and are not intimidated by such brutal acts," Haniyeh said.

Israel's 51-day offensive against the Gaza Strip left around 2,160 Palestinians dead and more than 11,000 others injured in July and August.

The offensive came to an end on August 26 after Palestinian factions signed a cease-fire deal with Israel under Egyptian mediation.