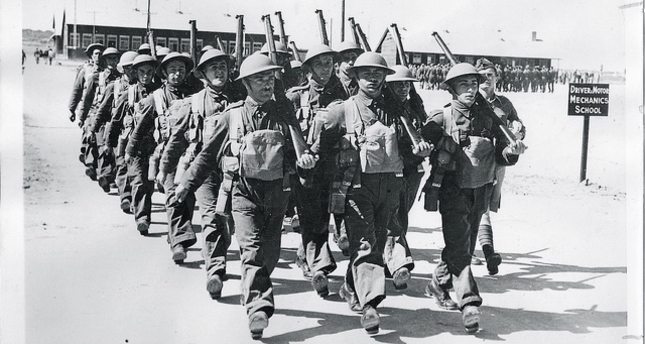 The legacy of the First World War, which emphatically swept across the world 100 years ago, continues to live on, largely affecting the political realm of the 21st century and still causing problems in several areas like Palestine

When driving a car, one must look at the rear view mirror to be able to move forward—much like history. By looking into the past, the world is given an opportunity to avoid the mistakes that were made, so that it may move forward and prosper. The First World War, as its names suggests, was the first global war in which the entire world was somehow involved. Many of the political issues the world faces today are a result of the war that took place exactly 100 years ago.

There are many political legacies that originated from WWI says Steve Bunn, history professor at Ryerson University in Toronto. "In Canada, where I'm from, the fact that the First World War ended on November 11, 1918 at 11 a.m. is drilled into the mind of every school child," he said. "But when one looks at the geopolitical situation today, the reality is that the First World War never really ended, and is in fact still being fought, right up to this very minute."

The root of a lot of the conflicts that go on in the Middle East can be traced back to WWI. Prior to the war, the Middle East was a part of the Ottoman Empire, and its collapse acted as a pivotal point between the West and the Arab world.

France and Britain, the allies, who were constantly competing for colonies, made agreements that would shape the Arab world today. The Sykes-Picot Agreement was between France and Britain, made in 1916, two years after the start of the war, dividing the remains of the Ottoman Empire amongst themselves, which created the blueprint for today's map of the Middle East.

France was promised what is now Syria and Lebanon, while Britain would keep the Gulf States it already controlled due to the rising demand of oil control, along with what is now Iraq and Jordan. The agreement was undisclosed because during that time, the allies didn't want the Arabs to find out of this division because they were trying to convince them to join the revolt against the Ottomans, promising them independence. The Arabs were merely players in France and Britain's game of power, resulting many of the uprisings and civil wars scattered around the Arab world today. After WWI, coups were not unusual in the Middle East and sovereignties were regularly toppled, causing tyrannical republics to outnumber monarchies decades later.

"Perhaps the most illustrative example was ISIS symbolically bulldozing a path through the earthen berm demarcating the border between Iraq and Syria announcing that their goal was to 'smash the Sykes-Picot border," said Bunn.

Access to oil became a deciding factor of control and power in WWI. Current American policies towards the Middle East revolve around that constant factor. "It is for this reason that the U.S. props up brutal dictators like Hosni Mubarak and Abdel Fatah El-Sissi in Egypt, and Bashar al-Assad in Syria," said Bunn. "Oil is vastly under-valued on the open market, and Middle East dictatorships are required in order to keep it that way." For this reason, if the Middle East undergoes true democratic reform, the U.S. would greatly suffer, leading to instances like when Mubarak was jailing protestors for calling upon democracy, equality and freedom, opening tear gas at them with "made in the USA" stamped on the canisters.

"After decades of this type of hypocrisy, a truly democratic Middle East with free and fair elections would see parties like the Muslim Brotherhood come to power, who would then try to re-negotiate peace with Israel, and this for the U.S. would be a non-starter," said Bunn.

Palestine, under the same agreement that dictated the fate of the Arab world, was to be under international control, as it was an area of interest for many. U.S Secretary of State, John Kerry, has recently re-opened peace talks between Israel and Palestine—a conflict that was well founded during WWI. Britain, who promised Palestine to more than one nation in hope of gaining allies, made it clear that the end goal was to win the war not for any political or economic reason, but as an end in itself. "The Israeli-Palestinian conflict is a perfect example of the unintended consequences of war, and shows that any war, no matter how 'just' it may seem at the time, is ripe with blowback," said Bunn.

In 1917, British Foreign Secretary, Arthur Balfour, wrote a letter to the Jewish Zionist Lord Rothschild stating the British government's support for an "establishment in Palestine of a national home for the Jewish people; it being clearly understood that nothing shall be done which may prejudice the civil and religious rights of existing non-Jewish communities in Palestine."

Evidently, the expulsion and ethnic cleansing of over 700,000 Palestinians and their daily struggles to survive proves that Israel didn't play by the rules. For over six decades, the conflict has yet to be resolved. One can only wonder if the conflict would have existed, had former super-powers not interfered by their self-governed powers.

"I doubt that the U.S. will ever resolve the Israeli-Palestinian conflict," said Bunn. Both politically and economically, Israel and the U.S. have become co-dependents. "Therefore, any American politician that suggests a policy other than unequivocal support for Israel will probably never get anywhere near the Oval Office."

Bunn says there is good reason to think that the younger generation of Israelis and Palestinians will solve the conflict for themselves. "There will be an eventual solution, but the question is how much more death and violence will occur before that solution is reached?" There was a time when it seemed like the violence in Northern Ireland would never end, or that the Soviet Union would never fall, but both of these have come to pass.

For years after Israel was formed, the Israeli government promoted the propaganda myth that the Palestinians had left their homes voluntarily and were told by their Arab leaders to leave until they defeat the Zionist forces, depicting Israel fighting an honorable and courageous war. From the many political legacies of WWI, according to Bunn, the most persistent and nefarious is the proven success of war propaganda.

Propaganda in its modern sense truly came of age in the First World War, and its practice today continues unabated.

"Perhaps the most successful propaganda endeavor of recent times has been that the U.S. was attacked on 9/11 due to the fact that Muslims 'hate us because of our freedoms,'" said Bunn. "The manner in which the Western media still talks about 'Muslim countries' and 'the Muslim world' – as if there is no meaningful difference between, Iran, Saudi Arabia and Turkey – is another perfect example of the simplistic narrative of us vs. them/good vs. evil engendered by war propaganda."

With violence and conflict rising in almost every corner of the world, it's easy to lose hope, but bodies like the United Nations, "despite its flaws," says Bunn, have gone a long way to preventing the kind of war that occurred in 1914.