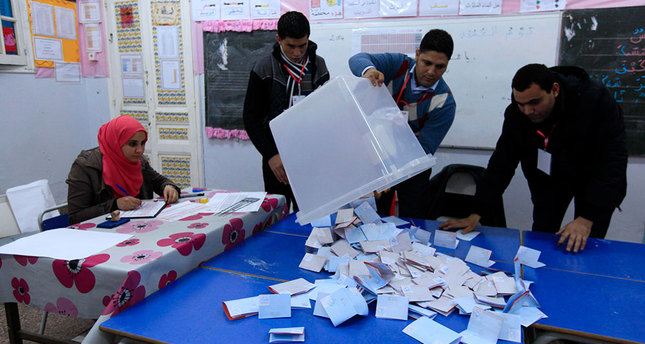 by Daily Sabah Dec 21, 2014 12:00 am
Tunisians voted on Sunday for a new president in a runoff between a symbol of the country's previous regimes and a veteran human rights activist who came to power after the 2011 revolution. "It is important because we don't know ahead of time who will win, unlike in the past," said Hatem Dekali, an employee of the national airline, as he cast his vote in the Tunis suburb of Carthage.

Beji Caid el-Sebsi and Mohamed Moncef Marzouki compete for the presidency. Essebsi was born in 1926 and studied law in Paris, becoming a lawyer in 1952. From 1957 to 1971, he performed various functions such as director of the regional administration, general director of the Sûreté Nationale, Interior Minister from July 5, 1965 to Sept. 8, 1969, minister-delegate to the prime minister and defense minister from Nov. 7, 1969 to June 12, 1970 and then ambassador to France. From October 1971 to January 1972, he advocated greater democracy in Tunisia and resigned his function, then returned to Tunis. In April 1981, he came back to the government under Mohamed Mzali as minister of foreign affairs, serving until September 1986. In 1987, he was appointed as ambassador to Germany. From 1990 to 1991 he was the president of the Chamber of Deputies. His last parliamentary mandate ended in 1994.

Marzouki was born in 1945, a son of an imam who had to flee to Morocco in 1950s due to the political suppression by the regime. He studied medicine in Strasbourg. He joined activities to support oppressed people. He travelled to India to support Mahatma Ghandi's non-violent resistance and South Africa to support Nelson Mandela against the apartheid regime. He became president of the Arab Commission for Human Rights and as of Jan. 17, 2011 continues as a member of its executive board. In 2001, he founded the Congress for the Republic Party but it was banned by the regime. After the revolution, the Constituent Assembly of Tunisia elected Marzouki as the interim president.