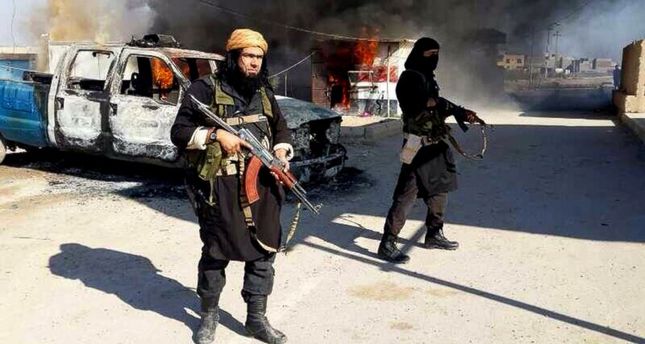 by Daily Sabah Dec 24, 2014 12:00 am
The advance of the Islamic State of Iraq and al-Sham (ISIS), which controls large swathes of Iraq and Syria, has ground to a halt following the U.S.-led anti-ISIS coalition that has been pounding the militants' targets while the armed Kurdish factions, including the Kurdistan Regional Government's peshmerga forces, have been organizing operations with Iraqi forces, which are backed by Shiite militias. Kurdish fighters are pushing their way into the town of Sinjar, backed by U.S.-led coalition airstrikes against ISIS, which captured the town last summer. Loud explosions and intense gun battles were heard from inside the town. Kurdish peshmerga fighters last week launched the operation to retake Sinjar.

Kurdish fighters opened up a passageway to Mt. Sinjar, overlooking the town, to evacuate some of the thousands of Yazidis trapped on the mountain due to the fighting. At the same time, Kurdish forces have launched an assault on ISIS positions in Mosul. Syria's Kobani, which has become a symbolic town for both sides of the conflict, is still under siege. More than three months ago, ISIS militants launched assaults on the town. While the militants advanced into the town at the beginning, the armed Kurdish factions, along with some groups from the Free Syrian Army, prevented the militants from seizing control. Although the militants have not retreated fully, they have apparently lost the ground required to launch a mass attack. The fights are not as intensified as they once were.

The Britain-based Syrian Observatory for Human Rights group that monitors the war in Syria claimed that the U.S.-led airstrikes have killed at least 1,171 people, mostly ISIS militants, during the last three months. Rami Abdulrahman, the head of the Syrian Observatory for Human Rights, told Reuters only 52 were civilians. But his network of activists, who are based around Syria, said the death toll since the military campaign was launched in late September was probably higher among hardline insurgents. "This is because of the difficulty of activists reaching areas hit by the coalition and also because ISIS keeps a tight lid on it is human losses," Abdulrahman said. In total, the United States has carried out 488 air strikes in Syria through Dec. 15, according to U.S. military data published by Reuters. The Observatory figures do not include casualties from air strikes on ISIS targets in Iraq.