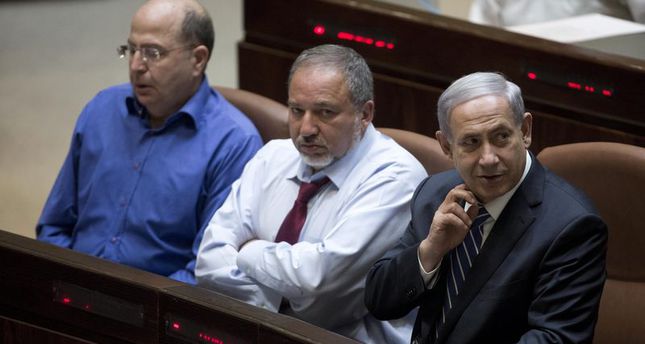 by AA Dec 24, 2014 12:00 am
Israeli Foreign Minister Avigdor Lieberman has said that Prime Minister Benjamin Netanyahu's policies vis-à-vis the conflict with the Palestinians have failed. He warned that they could lead to a "diplomatic tsunami" against the self-proclaimed Jewish state.

Lieberman added that Israel's relations with the European Union would deteriorate due to the lack of progress in the peace process - a situation that would, he warned, damage the Israeli economy, Israeli daily Haaretz reported.

"Look what's happening with Russia," the foreign minister was quoted as saying at a closed conference held at Tel Aviv University, referring to EU sanctions recently imposed on Russia due to that country's role in the Ukrainian conflict.

"This is important for our relations with the European Union and the United States. For anyone who doesn't know, our largest market is the EU, in both exports and imports," Lieberman asserted.

"I'm pleased with what we've done with the Chinese; there's been growth in our trade with them. But in the end, our biggest market is the EU," he added.

Peace talks between Israeli and Palestinian negotiators collapsed in April over Israel's refusal to release a group of Palestinian prisoners despite earlier pledges to do so.

Last week, Jordan, on behalf of the Palestinians, filed a draft resolution at the UN Security Council, which, if approved, would call for a full Israeli withdrawal from Palestinian land (occupied since 1967) by the end of 2017.

The draft resolution further calls for "a just, lasting, comprehensive and peaceful solution [to the conflict], which would mark the end of the Israeli occupation."

The proposed resolution is aimed at ending the perennial Palestinian-Israeli conflict, the roots of which date back to 1917 when the British government gave its blessing to "the establishment in Palestine of a national home for the Jewish people."

Israel occupied East Jerusalem and the West Bank during the 1967 Middle East War. It later annexed the holy city in 1980, claiming it as the capital of the self-proclaimed Jewish state in a move never recognized by the international community.

Palestinians, meanwhile, want a state of their own in the Gaza Strip and the West Bank, with East Jerusalem as its capital.
Last Update: Dec 24, 2014 1:29 pm
RELATED TOPICS