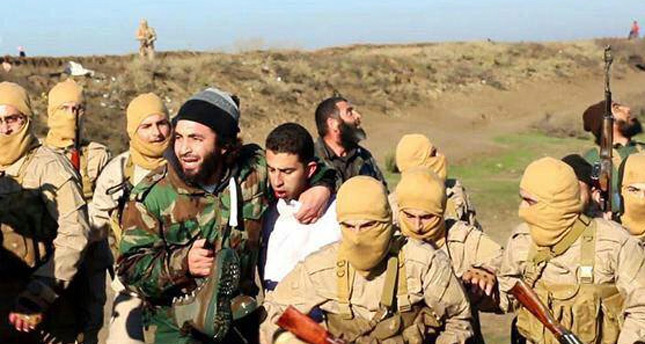 by Anadolu Agency Dec 25, 2014 12:00 am
Jordan's armed forces said one of its pilots had been captured after his plane fell during an air raid over the north-eastern Syrian province of Raqqa on Wednesday. "Jordan holds the group and its supporters responsible for the safety of the pilot and his life," an army statement read on state television said. The Syrian Observatory for Human Rights, an anti-Syrian government activist group based in Britain, earlier reported the aircraft was brought down in an area controlled by Islamic State of Iraq and al-Sham (ISIS) militants. "We have confirmed reports that ISIS members took a [non-Syrian] Arab pilot prisoner after shooting his plane down with an anti-aircraft missile near Raqqa city," the Observatory said.

The Observatory, which relies on a wide network of sources inside Syria, said ISIS used a missile taken from Syrian rebels battling president Bashar al-Assad's regime. The ISIS branch in Raqqa published several photographs on jihadist websites purporting to show its fighters holding the captured pilot, with a caption identifying him as Jordanian. The photographs show the pilot, wearing only a white shirt, being carried from a body of water by four men, and also on land, surrounded by about a dozen armed men. Another image shows the pilot's military identification card, showing his name as Maaz al-Kassasbeh, his birthdate as May 29, 1988, and his rank of first lieutenant. The images were verified by two close relatives contacted by Reuters who said they had been notified by the head of the Jordanian air force the pilot was held captive.

Both the Syrian government and a U.S.-led coalition set up to fight the militant group regularly bomb the IS targets in Raqqa province. Events in Syria are difficult to confirm because of restricted media access to conflict zones. There was no immediate comment from Syrian government or officials from countries participating in the coalition.

Jordan is among a number of countries that have joined the US-led alliance carrying out air strikes against ISIS after the militants seized control of large parts of Syria and Iraq. Saudi Arabia, the United Arab Emirates, Jordan and Bahrain are taking part in the air strikes in Syria alongside the US. Australia, Belgium, Britain, Canada, Denmark, France and The Netherlands have joined the raids in Iraq.

ISIS has committed widespread atrocities in areas under its control, including mass executions of captured soldiers and public beheadings of hostages including Western journalists and aid workers.

Meanwhile, air strikes by government aircraft killed more than 20 people in Raqqa province on Tuesday, the Observatory said. Also in Iraq ISIS militants continue to fight Peshmerga forces. ISIS swept into Sinjar and surrounding villages as part of their summer blitz across northern Iraq. Thousands of Yazidi residents fled into Mount Sinjar while hundreds were killed. Kurdish fighters are on an offensive to push back ISIS in this corner of Iraq near the Syrian border.