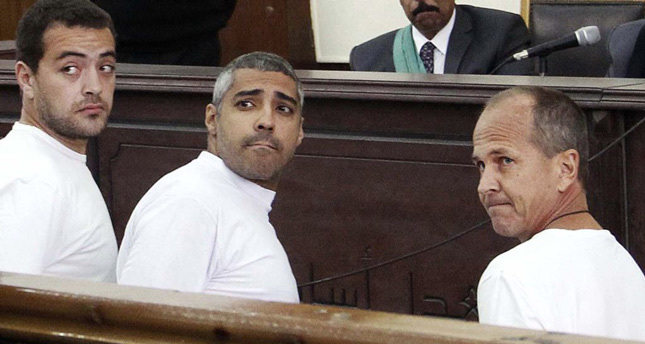 |AP
by Daily Sabah Dec 26, 2014 12:00 am
Egyptian and Qatari intelligence officials have met in Cairo to discuss the ongoing reconciliation process, according to security and diplomatic sources. The sources said Qatar's intelligence chief, Ahmed Nasser Bin Jasim al-Thani, also joined the talks. It was reported that Egyptian and Qatari heads of state may meet in Saudi Arabia's Riyadh or Cairo in the early months of next year.

Saudi Arabia had backed the military coup and showered billions of dollars on the collapsed Egyptian economy. "Saudi Arabia stressed its support and keenness on opening a new page between the two countries for enhancing integration and cooperation between the two countries to achieve higher interests of the Arab and Islamic nations. We hope all honorable scientists, intellectuals, writers and men of the media respond and support this step," said Saudi Arabian officials in a statement.

Qatar, meanwhile, praised the initiative of bringing Doha and Cairo closer together. "[The state of Qatar] stresses its adherence to the contents of the [Saudi Royal Court] statement, praising the sincere efforts of the Saudi king … and commends his wisdom and strong commitment to strengthening Arab solidarity," according to a statement carried by the state-run Qatar News Agency.

Qatar also stressed its "complete standing with Egypt, as it has always done," noting that the security of the two states was interlinked. "Talks are under way to organize a meeting between the Egyptian president and the emir of Qatar," an Arab diplomatic source told AFP. "The talks took place in Cairo over the past two days between the head of Qatari intelligence and his Egyptian counterpart for arranging such a meeting in Riyadh," the official added. He said there was a possibility that a meeting between President el-Sissi and Qatar's Emir Sheikh Tamim bin Hamad al-Thani "could be held on el-Sissi's way back from China."

Egypt said it looked "forward to a new era that can bring an end to past disagreements," according to a statement from el-Sissi's office that was issued after the Egyptian leader met the two envoys.

However, despite the ongoing talks, the tension between the countries has not been eradicated. The Qatari-owned Al-Jazeera news network on Monday shut down its Egypt channel claiming that the channel had angered the Egyptian government, who cancelled their permit. Three Al Jazeera staff were imprisoned after the coup and on the Al Jazeera English website their names and pictures are posted with the title "journalism under fire."

Qatar had backed Egypt's first democratically elected president, Morsi, who was ousted after a bloody military coup, headed by the current president, el-Sissi. Qatar, along with Turkey, had been the only country that opposed the coup and el-Sissi's rule. Saudi Arabia, the UAE and Bahrain had withdrawn their ambassadors from Qatar last March due to Qatari support for Morsi and the Muslim Brotherhood, which was labeled a terrorist group by the three Gulf countries and the military-backed Egyptian government. The three states agreed to return their diplomats last month, seeking to patch up the schism between the Arab world's wealthiest countries that has ramifications across the region, and was a signal of reconciliation among the countries.

The political dispute between Qatar and Egypt came about for several reasons. Firstly, Qatar had been supporting the Muslim Brotherhood by accommodating some of its members in Doha because they would have been tried and executed in Egypt if they returned.

Secondly, Qatar has been under pressure because staff from the Doha-based Al-Jazeera TV are still in prison in Egypt due to their journalistic activities during the coup and the Rabaa Square massacre that left more than 800 dead. Al-Jazeera is one of the few media organizations that has consistently broadcast the human rights violations committed by the military-backed government.

Thirdly, Yusuf al-Qaradawi, a prominent Doha-based Islamic scholar, who was supported by the Muslim Brotherhood and Morsi, denounced the Saudi-backed el-Sissi rule through targeting the king of Saudi Arabia directly. Saudi Arabia's struggles resulted in the release of a warning of arrest for Qaradawi by Interpol.

Fourthly, oil-rich Qatar, which has entered several economic sectors, attempted to isolate itself from the economic benefits of the Gulf region under the leadership of Saudi Arabia.

Fifth, except for Turkey, no other international or local actor in the region, like the U.S., Israel and Jordan, sided with Morsi or challenged the coup. A tiny country, Qatar faced opposition due to its policy on Egypt.