Syrians killed by either regime or US-led coalition 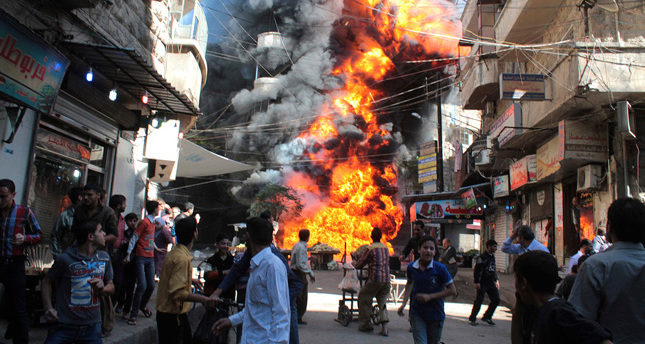 Syrians have been subjected to atrocities since the beginning of the civil war began, but international intervention through constant air and ground battles has rendered the country uninhabitable

The Arab uprisings, which euphorically swept across the Middle East and North Africa, attracted Syrians who had lived under the dictatorship of the Assad family since 1970, when Bashar's father Hafiz Assad seized power. Since then the majority Sunnis were forced to live in a police state that tried to control every movement, organization or business through the use a wide-ranging intelligence service.

In March of 2011, Syrians were emboldened enough to raise their voices against the dictatorship. However, the regime's response was not as peaceful as the protests. And the country was subsequently dragged into a deadly civil war after opposition groups took up arms against the government. The opposition groups have also been divided internally. While moderate opposition groups like the Western-backed Free Syrian Army (FSA) were struggling for a democratic Syria where all religious and political groups would be free to exist, radical elements like al-Qaida's Syrian branch Nusra Front or the Islamic State of Iraq and al-Sham (ISIS) aimed to establish a new Syria, ruled by an extremist religious jurisprudence. While the war continued among the groups and the regime forces, and other groups loyal to the regime like Iran-backed Hezbollah, the U.S. established an international coalition against ISIS on September after an American citizen was beheaded. Moreover, ISIS militants in the alliance with Nusra Front besieged the Kurdish town of Kobani, near the Turkish border. The town was strategically important in terms of supplying a new route for the group to integrate its bases in Iraq and Syria.

The siege of Kobani by ISIS militants changed the balance of the three-year-long Syrian civil war. While ISIS seems determined to capture the small Kurdish town to improve communications with cities in Iraq that were captured a few months before and attack Kurds in northern Iraq, the PKK's official Syrian branch, the Democratic Union Party (PYD) and its armed People's Protection Units (YPG), were trying to defend the town, aided by weapons and airstrikes provided by the anti-ISIS coalition. The PYD, which had allied with the Assad regime and continues to kill unarmed people and attack opposition groups, including the FSA apparently, needs more military and strategic aid to defeat the militants. The FSA, which suffers from a lack of administration and a leader, has been divided over allying with the PYD, as some members claim that the opposition can benefit from the U.S. and other members of the coalition if they also join the battle against ISIS. Some members, however, have accused the U.S. of being hypocritical since they have not received sufficient aid during their struggle against the regime.

The coalition declared its aim and said ISIS would be eradicated. However, the regime felt free to carry out its attacks on civilians across the country. Local sources underscored that the air raids launched by the regime, which also include dropping barrel bombs, have killed dozens of Syrians since the anti-ISIS coalition started pounding ISIS in Syria. Local sources also underscored the fact that coalition attacks on ISIS have not worked due to the group's continued advance, or at least retention of their positions.

According to pro-opposition monitoring group the Syrian Network for Human Rights (SNHR), ever since the coalition started aerial strikes on Sep. 23, 3,273 civilians have been killed by government forces and 117 were killed by ISIS. The coalition has killed at least 40 civilians while non-ISIS opposition groups have killed 123. The group also said that 404 of the 3,273, killed by regime forces were children while 327 others were women. Also, 411 people were tortured to death in regime prisons. Although it is impossible to confirm the authenticity of the numbers due to the war conditions, the situation shows that Syrian people continue to suffer, regardless of the attacker. British-based Syrian Observatory for Human Rights also issued a report saying that the coalition killed more than 1,000 people, mostly ISIS militants. Thehead of the monitoring group, Rami Abdulrahman, said 52 of those were civilians.

Pro-opposition groups, in several statements, claim that the coalition attacks only harm civilians. Violations Documentation Center said in a statement, "The present air strikes against those groups raise concerns that civilians may also pay a heavy price, as such groups establish command centers in civilian areas, in various Syrian towns and villages. Furthermore, a number of the command centers have been converted by those groups to become detention centers. Thousands of inmates and persons who have been kidnapped, including many activists and journalists are now detained in such centers."

The General Commission of Sport and Youth in Syria, a civil organization made up of opposition sports figures and supporters, released a statement saying "There are a multitude of opinions and analyses around these attacks. The attackers say that they are targeting terrorism, represented by the Islamic State, but when everyone sees how the coalition warplanes target other brigades which are fighting the regime, and avoid hitting the regime or its terrorist militias the [aforementioned opinions and analyses] become muddled. Destroying terrorism needs to begin from the top, in the palaces of the Assad regime, and putting an end to the flow of Syrian blood begins with the fall of this regime."