No safe place for African refugees seeking protection in Libya 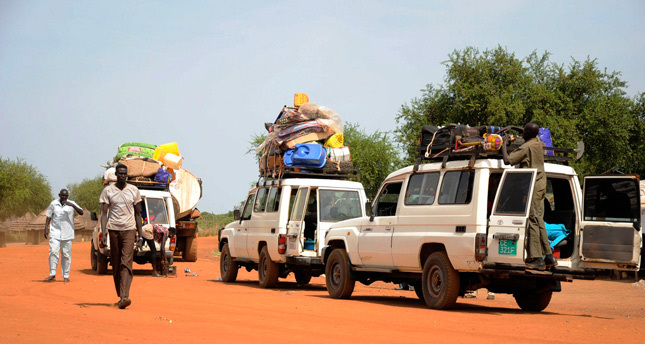 In the midst of the chaos and political instability in Libya, many African refugees have fled from violence-hit Somalia and Eritrea, taking shelter in refugee camps set up by the United Nations in the conflict-torn cities of Benghazi and Tripoli. However, the safety of thousands of refugees in Libya is of major concern for the U.N. because the U.N. refugee camps are situated in the middle of the chaos where violent attacks frequently occur. As more African refugees choose to stay in Libya to reach Europe, many Libyans want to take shelter in neighboring countries like Tunisia and Algeria to escape the ongoing violence. With Libya long suffering from insecurity and instability, the scale of internal displacement has reached an alarming point as a result of the escalated conflict. Due to ongoing intense fighting among rival armed groups in western, eastern and southeastern Libya, more than 100,000 people have been forced to flee their homes in one month, according to a United Nations' refugee agency statement.

There has been no safe place for Somali and Eritrean refugees to take refuge, meaning many cannot escape the violence. Many African refugees consider Libya a gateway to Europe where they can shelter in peace. Yet, European Union countries have not completely opened up their borders to refugees, and it is getting more difficult for African refugees to reach Europe's borders thanks to new, stricter refugee policies.

"I would like my children to be able to live in safety in a western country," said a refugee from Somalia, who lives in a building housing nearly 40 people, the United Nations High Commissioner for Refugees (UNHRC) reported on Dec. 26. Due to the conflict in Somalia, he said that he fled his home country to take shelter in refugee camps set up by the U.N. refugee agency in Libya with the sole aim of reaching Europe. He said that he attempted to reach the European border three times by boat from the Libyan coast, however, he failed in each attempt "with many deaths along the way."

Europe has faced the largest number of sea arrivals as the conflicts in Libya continue to force a considerable number of desperate refugees residing in refugee camps to flee from the turmoil in Libya in order to avoid violent attacks between rival militias. At least 384,000 asylum seekers have risked their lives through sea crossings since the beginning of 2014, according to UNHRC figures. The agency reported that among them, 4,272 were killed while crossing the sea. In the face of the sharp increase in the number of African refugees trying to reach Europe's border, the European Union refugee policy toward African migrants has undermined the value of human life while imposing strict measures over search and rescue operations. As the number of desperate people fleeing conflict and war in order to reach Europe, through crossing the Mediterranean, has gradually increased, the new EU policy for sea rescue missions, called "Operation Triton," is likely to lead to many more migrants' deaths, due to the limited scope of operations over the Mediterranean Sea.

In Libya, there are 25,561 refugees residing together with 53,579 internally-displaced people (IDP), according to figures released by the U.N. refugee agency. Because Libya still suffers from instability and violence, many Libyans have chosen to flee to Tunisia. A massive influx of Libyan nationals to Tunisia, through the Ras Ajdir border crossing between Tunisia and Libya, was reported on Saturday, according to a statement by the Tunisian customs service, the Kuwait news agency (KUNA) reported. Libya has been suffering from growing instability as heavy clashes further polarize the country. Since the ousting of long-ruling dictator Moammar Gadhafi, the Libyan government has been at the mercy of rogue brigades as the central government has not had enough power to regain control over its territory.

"The eruption of civil conflict across the main urban centers in Libya in 2014 led to the evacuation of all international presence and the suspension of UNHCR activities. In 2015, depending on the security situation and the re-establishment of access to populations of concern, UNHCR will... provide assistance to people of concern in detention and advocate for alternatives to incarceration," said the UNHRC.