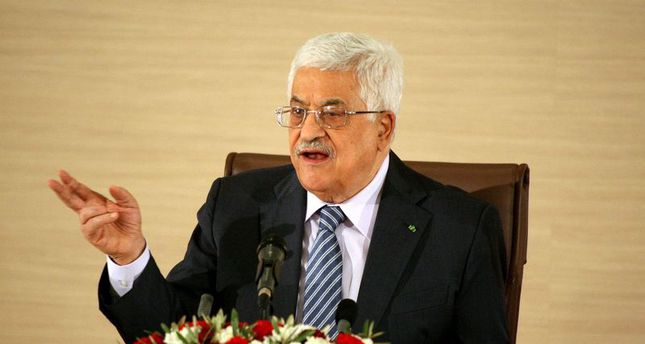 by Associated Press Dec 31, 2014 12:00 am
Stung by a resounding defeat in the U.N. Security Council, the Palestinians announced Wednesday that they joined the International Criminal Court to pursue war crimes charges against Israel.

The move by Palestinian President Mahmoud Abbas set the stage for a diplomatic showdown with the United States and drew an angry response from Israel.

"The one who needs to fear the International Criminal Court in the Hague is the Palestinian Authority, which has a unity government with Hamas," Prime Minister Benjamin Netanyahu said in a statement.

"We will take steps in response and defend Israel's soldiers," Netanyahu said in a statement.

Netanyahu called Israel's soldiers "the most moral army in the world" and said the country would take unspecified "retaliatory steps."

U.S. State Department spokesman Edgar Vasquez said America strongly opposed the move and warned it would be "counter-productive and do nothing to further the aspirations of the Palestinian people for a sovereign and independent state."

"It will badly damage the atmosphere with the very people with whom they ultimately need to make peace," Vasquez said in a statement.

Abbas has been under heavy domestic pressure to take action against Israel following months of tensions fueled by the collapse of U.S.-brokered peace talks, a 50-day war between Israel and Palestinian militants in Gaza, a spate of deadly Palestinian attacks on Israeli targets and Israeli restrictions on Palestinian access to a key Muslim holy site in Jerusalem. Tuesday's defeat in the U.N. Security Council further raised pressure on Abbas to act.

"We want to complain. There's aggression against us, against our land. The Security Council disappointed us," Abbas said as he gathered a meeting of the Palestinian leadership in the West Bank.

Abbas had threatened to join the international court if Tuesday's Security Council resolution failed. The Palestinians had asked the council to set a three-year deadline for Israel to withdraw from all occupied lands claimed by the Palestinians.

After two decades of failed, on-again, off-again peace talks, the Palestinians have grown disillusioned and decided to seek international recognition of their independence in the absence in various global bodies. While the campaign does not change the situation on the ground, the Palestinians believe the strong international support will put pressure on Israel to allow the creation of a Palestinian state in the West Bank, Gaza Strip and east Jerusalem.

Israel, which captured the three areas in 1967, says Palestinian independence can only be reached through negotiations. It opposes the Palestinian diplomatic campaign as an attempt to bypass negotiations.

The Palestinian campaign scored a major victory in 2012 when Palestine was admitted to the U.N. General Assembly as a nonmember observer state. This upgraded status gave the Palestinians the authority to join dozens of international treaties and agencies.

Still, turning to the International Criminal Court marks a major policy shift by transforming Abbas' relations with Israel from tense to openly hostile. Abbas has been threatening to join the court since 2012, but held off under American and Israeli pressure. The Palestinians can use the court to challenge the legality of Israeli settlement construction on occupied lands and to pursue war crimes charges connected to military activity.