US, NATO mark end of 13-year war in Afghanistan 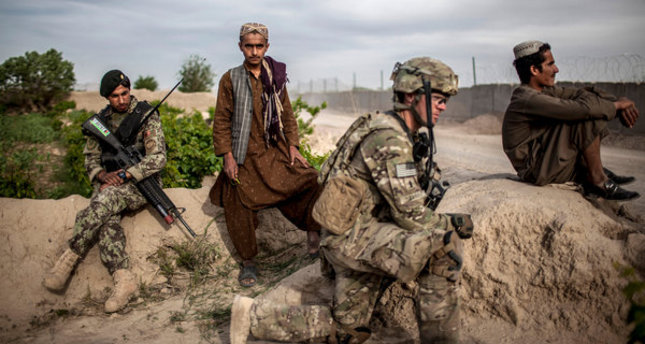 The war in Afghanistan formally ended on Sunday, but aside from eradicating Taliban insurgents, it left thousands dead and internally displaced people who struggle to survive in refugee camps

The war in Afghanistan, fought for 13 bloody years and still raging, came to a formal end Sunday with a quiet flag-lowering ceremony in Kabul that marked the transition of the fighting from U.S.-led combat troops to the country's own security forces. In front of a small, hand-picked audience at the headquarters of the NATO mission, the green-and-white flag of the International Security Assistance Force was ceremonially rolled up and sheathed, and the flag of the new international mission called Resolute Support was hoisted.

U.S. Gen. John Campbell, commander of ISAF, commemorated the 3,500 international soldiers killed on Afghan battlefields and praised the country's army for giving him confidence that they are able to take on the fight alone. "Resolute Support will serve as the bedrock of an enduring partnership" between NATO and Afghanistan, Campbell told an audience of Afghan and international military officers and officials, as well as diplomats and journalists. "The road before us remains challenging, but we will triumph," he added.

Beginning Jan. 1, the new mission will provide training and support for Afghanistan's military, with the U.S. accounting for almost 11,000 of the 13,500 members of the residual force. "Thanks to the extraordinary sacrifices of our men and women in uniform, our combat mission in Afghanistan is ending, and the longest war in American history is coming to a responsible conclusion," U.S. President Barack Obama said in a statement issued in Hawaii, where he is on vacation with his family.

Afghan President Ashraf Ghani, who took office in September, signed bilateral security agreements with Washington and NATO allowing the ongoing military presence. The move has led to a spike in violence, with the Taliban claiming it as an excuse to step up operations aimed at destabilizing his government.

Taliban spokesman Zabihullah Mujahid called Sunday's event a "defeat ceremony" and said the insurgents' fight would continue. "Since the invasion in 2001 until now, these events have been aimed at changing public opinion, but we will fight until there is not one foreign soldier on Afghan soil and we have established an Islamic state," he said.

This year is set to be the deadliest of the war, according to the United Nations, which expects civilian casualties to hit 10,000 for the first time since the agency began keeping records in 2008. Most of the deaths and injuries were caused by Taliban attacks, the U.N. said. This has also been a deadly year for Afghanistan's security forces, army, paramilitary and police, with around 5,000 deaths recorded so far. Most of those deaths, or around 3,200, have been police officers, according to Karl Ake Roghe, the outgoing head of EUPOL, the European Union Police Mission in Afghanistan, which funds and trains a police force of 157,000.

Afghans, if not killed, become refugees since the clashes have internally displaced them. Thousands of Afghans are pouring into makeshift camps in the capital where they face a harsh winter as the Taliban return to areas once cleared by foreign forces, who this week are marking the end of their combat mission.

On the grimy outskirts of Kabul, hundreds of families are huddled in flimsy tents or mud shelters at the Bagrami camp. By day the children forage for fuel and food. At night the families burn garbage to try to keep warm as the icy winds sweep down from the Hindu Kush Mountains surrounding the city and temperatures plunge to below freezing.

"Violence has forced us out of our homes but here misery and poverty have made our life even more difficult," said Abdul Qayyum, 52, who fled here with his wife and eight children. "Such a life is not worth living." Like the others in the camp, they fled their home in Sangin in the volatile Helmand province, an opium-rich region where the British struggled for years to keep the Taliban at bay before withdrawing in 2010.

Emanuele Nannini, project coordinator of the Emergency aid organization, says its 90-bed hospital in Helmand's capital Lashkar Gah has been full for months with wounded civilians and combatants from both sides of the Sangin fighting. Unlike previous years, he said there had been no winter slowdown. The facility is "100 percent a war hospital," he added. The officials estimate that 3,000 families have been displaced from northern Helmand, mostly Sangin, since the summer. Some of that tragic fallout from the renewed violence can be found in Bagrami, in Kabul's eastern suburbs. People have been coming here from Sangin for the past six months, but conditions are so poor that many long for the war zones they left.

The Bagrami camp is effectively an illegal settlement on public parkland in a middle-class Kabul suburb. There is little local sympathy for the displaced, many in the camp said. Local authorities have objected to proposals to dig a well to provide more water for the 400 families here, and residents complain about the smoke from the fires as the displaced burn whatever they can find for heating and cooking.

Bebi has been at the camp for six months, she said, after losing her husband and oldest son when they were caught in the crossfire of a gunfight between government forces and insurgents. The men had stopped their farm work for a tea break when the firing started. "They were killed before my eyes," she said. She rounded up her remaining five children and made the 630-kilometer (390-mile) journey to Kabul in the hope of finding some means of support now that the breadwinners of her family are dead. "I am so worried about my children. We have no food, no water and even no blankets to keep my children warm," said Bebi.

The cash-strapped U.N. Office for the Coordination of Humanitarian Affairs plans to distribute some relief, food, children's clothing, firewood and plastic sheeting for shelter. But the agency's deputy head in Afghanistan, Catherine Howard, told people in the camp during a recent visit that there was no money for blankets.