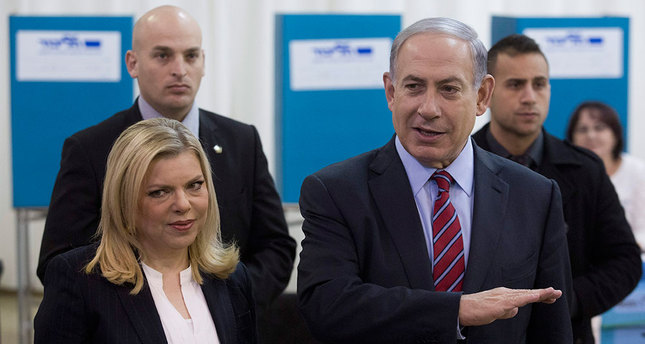 by Jan 01, 2015 12:00 am
Israeli Prime Minister Benjamin Netanyahu won another term as leader of the ruling Likud party ahead of a snap election, his group said Thursday, easily defeating his lone hard-right challenger.

Netanyahu is seeking a third straight stint in office, and a fourth in total. He has been in power since 2009, following a first term in 1996-1999.

The primary win clears the way for Netanyahu to lead his rightwing party into battle for a general election in March.

Turnout was more than 53 percent, according to an official estimate released soon after polls closed.

Likud's 96,651 members also voted to determine front runners on the party list for the March 17 election.

In a previous primary in January 2012, members voted out three leading moderates, heralding a shift to the right.

"Voters will be determining not only the face of Likud but its ideological agenda in the years to come," Yuval Karni wrote in the Yediot Aharonot newspaper, which holds an anti-Netanyahu stance, ahead of Wednesday's vote.

General elections had been due in late 2017, but the polls were brought forward by Netanyahu in early December after the collapse of his fractious coalition.

Casting his ballot at a polling station in Jerusalem on Wednesday, Netanyahu said the party must unify in the face of threats from the left.

"It is important at the end of the day that there be one strong Likud against the left in order to lead the state of Israel safely," he said.

Polls suggest Likud is likely to face a challenge from a center-left alliance of the opposition Labor party and the centrist HaTnuah of former justice minister Tzipi Livni in the March general election.

Observers say a center-left government would be much more likely to resume peace talks with the Palestinians.

Livni was Israel's chief negotiator during the last round of US-brokered talks, which collapsed in April mainly over the issue of settlement building.

The left has also criticized Israel's immigration policy, after Netanyahu's government pushed for a harsher crackdown on African asylum-seekers, whom it refers to as "infiltrators".

Commentator Yoaz Hendel said ahead of the primary that Likud was a party "fighting for survival" with little to offer in terms of dynamic leaders likely to garner votes.

"Today's Likud has no new, youthful, charismatic energy, and there is also no range of opinions," he wrote in Yediot.

Seventy candidates were vying for places on the party list, with all 18 of its lawmakers running for re-election except outgoing Culture and Sport Minister Limor Livnat, who is retiring from politics.

A law passed in March which raises the threshold of votes parties require to be represented in parliament could see many parties making alliances.