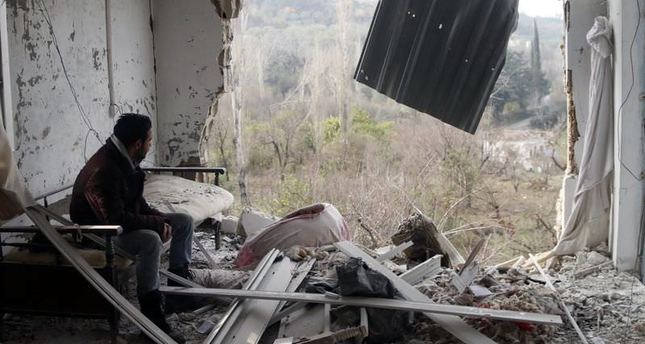 by Daily Sabah Jan 03, 2015 12:00 am
The Middle East and North Africa (MENA) region has endured one of its worst years in decades following clashes and conflicts that have spread across the region's countries. Many countries were shaken either by clashes or political crises. The war in Syria, which is entering its fourth year, has affected the whole region due to international interventions and radical groups like the Islamic State of Iraq and al-Sham (ISIS) gaining strength. In Iraq, the fall of the provinces of Mosul and Anbar to ISIS caused trouble. The cost of the clashes was very heavy for Syrians and Iraqis. According to the reports released by different organizations almost 100.000 people were killed in Iraq and Syria in 2014 while thousands are still missed.

Iraq, which had been suffering from internal sectarian clashes ever since the U.S. invasion in 2001, was shaken when ISIS captured several cities in Sunni-dominated areas and committed unprecedented atrocities against its opponents, including Yazidis, Shiites and Sunnis. Some 5.2 million people are in need of assistance throughout the country. 3.6 million people are living in areas under the control of ISIS and affiliated armed groups. Violations of human rights and international humanitarian law by all parties and against civilians of all ethnic and religious backgrounds continue to be committed.

Iraqi government figures showed that at least 15.000 people were killed in 2014 due to the endless clashes in the country. Figures compiled by the health, interior and defense ministries put the death toll at 15,538, compared with 17,956 killed in 2007 during the height of Sunni-Shiite sectarian killings. Last year's toll was also more than double the 6,522 people killed in 2013. "Yet again, the Iraqi ordinary citizen continues to suffer from violence and terrorism. 2014 has seen the highest number of causalities since the violence in 2006-2007. This is a very sad state of affairs," U.N. Iraq envoy Nickolay Mladenov said in a statement. The U.N. put the number of civilians killed in Iraq during 2014 at 12,282. Iraq Body Count, a Britain-based NGO that tracks violence in Iraq, gave an even higher toll, saying that 17,073 civilians were killed, which would make it the third deadliest year since 2003. "For Iraqis, it has been the most difficult and painful of years because of the attack of the (Islamic State group) terrorist gangs," Prime Minister Haider al-Abadi said in a New Year's speech, referring to jihadists responsible for much of the bloodshed.

In another report, released by Iraq Human Rights High Commissioner, the figures showed that at least 4.500 Iraqis were abducted in 2014. The member of the commissioner Fadıl el-Garravi said "several groups including ISIS abduct people for receiving ransom. Many of the abducted people were murdered, women were raped and girls were forced to marry." Underlining the unprecedented persecution, el-Garravi made a call on the U.S. and Iraqi government to establish an independent department to follow the incidents and to find solutions for the prevention.

The Arab uprisings, which euphorically swept across the Middle East and North Africa, attracted Syrians who had lived under the dictatorship of the Assad family since 1970, when Bashar's father Hafiz Assad seized power. Since then, the majority Sunnis were forced to live in a police state that controlled every movement, organization or business through the use a wide-ranging intelligence service.

In March of 2011, Syrians were emboldened enough to raise their voices against the dictatorship. However, the regime's response was not as peaceful as the protests, and the country was subsequently dragged into a deadly civil war after opposition groups took up arms against the government. The opposition groups have also been divided internally. While moderate opposition groups like the Western-backed Free Syrian Army (FSA) were struggling for a democratic Syria where all religious and political groups would be free to exist, radical elements like al-Qaida's Syrian branch Nusra Front or ISIS aimed to establish a new Syria, ruled by an extremist religious jurisprudence. While the war continued among the groups and the regime forces, and other groups loyal to the regime like Iran-backed Hezbollah, the U.S. established an international coalition against ISIS in September after an American citizen was beheaded.