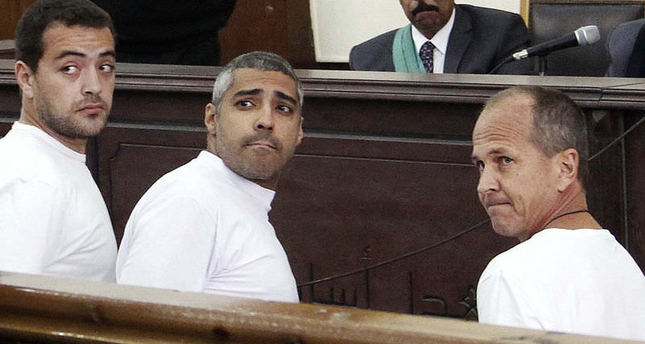 An Egyptian court ordered a retrial of three Al Jazeera reporters who were charged of helping the terror-listed Muslim Brotherhood. The court's decision comes after recent rapprochement attempts

An Egyptian court on Thursday ordered the retrial of three Al Jazeera staff members. Australian Peter Greste, Egyptian-Canadian Mohamed Fahmy and Egyptian Baher Mohamed of the broadcaster's English service were detained in December 2013 and accused of spreading false information and supporting the Muslim Brotherhood and Egypt's first democratically elected president, Mohammad Morsi, who was ousted after a bloody military coup, headed by current President Abdel Fattah el-Sissi. Greste and Fahmy each got seven years, and Mohamed was jailed for 10. "The Court of Cassation has accepted their appeal and ordered a retrial," Greste's lawyer Amr al-Deeb said Thursday. "I hope the reconciliation efforts between Egypt and Qatar continue for the sake of my brother and his colleagues ... who are paying the price for a political crisis," Adel Fahmy told reporters. Greste's parents told Australia's ABC News they were "shocked" by the decision. "This was always on the cards but even though we have learned not to expect anything or (to) expect the unexpected, we did expect a little bit better than this," his father Juris Greste was quoted as saying. Australian Foreign Minister Julie Bishop was more upbeat. "He is now back in the position of an accused person awaiting a trial," she told Australia's Nine Network in comments reported by the AAP news agency. Mohamed's wife Jihan welcomed the retrial as a "small but positive step towards my husband being freed." ""This past year has been the worst year of my and my children's lives," she added.

Qatar had backed Egypt's first democratically elected president, Morsi, who was ousted after the bloody military coup headed by current president, el-Sissi. Qatar, along with Turkey, had been the only country that opposed the coup and el-Sissi's rule. Saudi Arabia, the UAE and Bahrain had withdrawn their ambassadors from Qatar last March due to Qatari support for Morsi and the Muslim Brotherhood, which was labeled a terrorist group by the three Gulf countries and the military-backed Egyptian government. The three states agreed to return their diplomats last month, seeking to patch up the schism between the Arab world's wealthiest countries, which has ramifications across the region, and was a signal of reconciliation among the countries.

In the last month, Qatari and Egyptian officials made steps toward solving the political crisis between the two countries that emerged after the coup. The court decision seems to be a fruit of the reconciliation process. There were a few reasons that caused the eruption of the political crisis. Firstly, Qatar had been supporting the Muslim Brotherhood by accommodating some of its members in Doha because they would have been tried and executed in Egypt if they returned. Secondly, Yusuf al-Qaradawi, a prominent Doha-based Islamic scholar, who was supported by the Muslim Brotherhood and Morsi, denounced the Saudi-backed el-Sissi rule through targeting the king of Saudi Arabia directly. Saudi Arabia's struggles resulted in the release of a warning of arrest for Qaradawi by Interpol. Thirdly, oil-rich Qatar, which has entered several economic sectors, attempted to isolate itself from the economic benefits of the Gulf region under the leadership of Saudi Arabia. Fourthly, except for Turkey, no other international or local actor in the region, like the U.S., Israel and Jordan, sided with Morsi or challenged the coup. A tiny country, Qatar faced opposition due to its policy on Egypt, especially from the other Gulf countries. Saudi Arabia, the UAE and Bahrain had withdrawn their ambassadors from Qatar last March due to Qatari support for Morsi and the Muslim Brotherhood, which was labeled a terrorist group by the three Gulf countries and the military-backed Egyptian government.