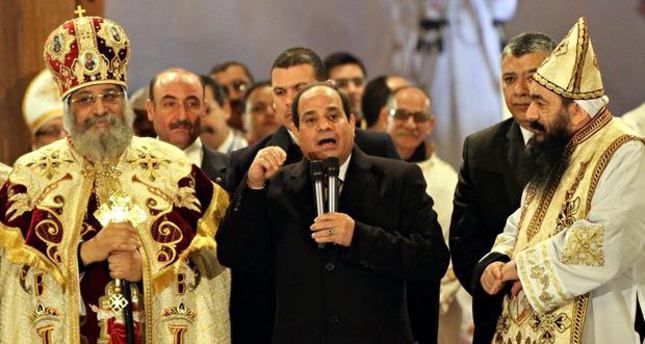 Egyptian President el-Sissi, who called on Muslim scholars for religious revolution last week, visited a Coptic Church and attended a religious ceremony that was organized to mark the Coptic Christmas

Egypt's President Abdel-Fattah el-Sissi, who headed a bloody military coup in 2013 that resulted in the ouster of the Egypt's first democratically elected president, Mohammed Morsi, visited the main Coptic Christian church on Tuesday night to attend a Christmas service. His visit and attendance at the service was the first time in Egyptian history for a president, according to local media. He made a surprise visit to Saint Mark's Coptic Orthodox Cathedral in Cairo, wearing a red tie and dark suit and surrounded by security guards. He saluted current Pope Tawadros II, who was an eager supporter of the military coup, and made a brief speech. "Egypt's Muslims and Christians are celebrating the religious event and are 'one entity' in the world's eyes. Let no one say, 'What kind of Egyptian are you?' It's not right to call each other anything but 'Egyptians.' We must only be Egyptians," he said. "We will love each other for real, so that people may see. A happy year to you and all Egyptians!" el-Sissi said. His visit came after the death of two Egyptian policemen guarding a Catholic church in the southern Egyptian city of Minya. The Coptic Church celebrates Christmas on Jan. 7 in the Western calendar, almost two weeks after most Western denominations. Copts account for 90 percent of Egypt's Christian population and 10 percent of Egypt's total population.

The visit was important in terms of showing el-Sissi's attempt to have a unique role in Egypt's history. Previous Egyptian presidents had never visited a church or established relations with Christians. Moreover, previous presidents had never called on Muslim clerics to make a religious revolution. El-Sissi, on one hand, appears to have gained a respectful place in the Islamic world despite being harshly criticized over his policies concerning the Muslim Brotherhood and the Rabaa massacre in August 2013 that left more than 800 dead. On the other hand, he has apparently attempted to establish a legitimate ground for operations on radical groups in Sinai after the militants, who are supported by the locals, labeled the Egyptian regime "infidel" in their speeches and publications.

Last week, speaking at Al Azhar, widely regarded as the best university in the Arab world and a place of Islamic scholarship dating back to the first years of Islam in Egypt, el-Sissi said: "Islam has become the enemy of the world. It is inconceivable that the thinking that we hold most sacred should cause the entire Islamic world to be a source of anxiety, danger, killing and destruction for the rest of the world. Impossible!

"That thinking, I am not saying 'religion' but 'thinking,' that corpus of texts and ideas that we have sanctified over the years to the point that departing from them has become almost impossible is antagonizing the entire world. Is it possible that 1.6 million Muslims should want to kill the rest of the world's 7 billion inhabitants so that they themselves may live? Impossible. I say and repeat again that we are in need of a religious revolution. You imams are responsible before Allah. The entire world is waiting on you. The entire world is waiting for your word because the Islamic world is being torn, it is being destroyed, and it is being lost. And it is being lost by our own hands," el-Sissi said. "We need a revolution of the self, a revolution of consciousness and ethics to rebuild the Egyptian person - a person that our country will need in the near future," he said.