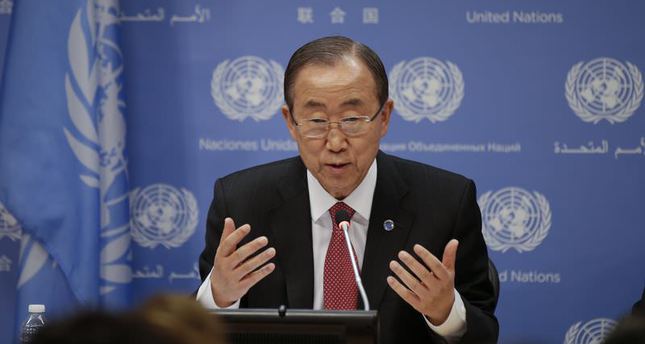 by Daily Sabah Jan 08, 2015 12:00 am
U.N. Secretary-General Ban Ki-moon said late Tuesday that the state of Palestine will join the International Criminal Court on April 1, a high-stakes move that will enable the Palestinians to pursue war-crimes charges against Israel. In a statement posted on the U.N.'s treaty website, the secretary-general announced his acceptance of the documents saying "the statute will enter into force for the State of Palestine on April 1, 2015" in accordance with the court's procedures. He said he was "acting in his capacity as depositary" for the documents of ratification.

Palestinian permanent observer at the U.N., Riyad Mansour, submitted the official application to join the International Criminal Court (ICC) to the U.N. secretary-general last week. Through joining the ICC, Palestine aims to bring human rights violations and war crimes committed by Israeli troops to the court since Israeli actions remain unpunished despite many reports by the U.N. or independent nongovernmental organizations that have shown that Israel committed war crimes several times. The U.N. confirmed receipt of the documents and said the next steps were being reviewed. It will take a minimum of 60 days for the request to come into effect. Speaking at U.N. headquarters in New York on Friday, Mansour said pursuing the war crimes case was an option that allowed Palestine to "seek justice for all those killed by the Israeli occupier." The move came two days after the application for membership in the Hague-based ICC was signed by Palestinian President Mahmoud Abbas. "We are honored that we are to be the 123rd state party to join the ICC, which will become effective about 60 days from now," Mansour said. "It is a very significant step that we will be taking. It is a legal option, it is a peaceful option, it is a civilized option and it is an option that anyone who upholds the law should not be afraid of," he added. When asked about the possibility of Palestinian leaders, particularly members of Hamas, being pursued for war crimes, Mansour said that the option was "political posturing." "We are not afraid of the judgment of the law, especially international law," he said.

Israeli leaders on Sunday threatened to take tougher action against the Palestinians over their decision to join the International Criminal Court, a day after freezing the transfer of more than $125 million in tax funds. In a first punitive response, Israeli Prime Minister Benjamin Netanyahu decided in consultation with senior ministers on Thursday to withhold the next monthly transfer of tax revenue, totaling some 500 million shekels ($125 million), an Israeli official said on Saturday. The Palestinians have said they intend on using their new membership in the Hague-based tribunal to press war crimes cases against Israel. "The Palestinian Authority has chosen confrontation with Israel and we will not sit idly by," Netanyahu told his Cabinet.